You are here: Home / MidEastGulf / ISIS shows a video of the transfer of its fighters through airports of Turkey to Syria and Iraq 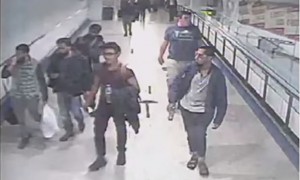 For the first time , ISIS organization come out with a video appears in public smuggling of Arab and foreign fighters into Iraq and Syria through airports of Turkey, in which

its border has been transferring them to feed the militant factions in Syria, without exception, whether ISIS organization or “al-Nusrah Front “and other fundamentalist extremist groups.

In response to clips of a stampede of thousands of Syrian immigrants fleeing to the European border , the version came” replaces people other than you,” to show ISIS organization transferring fighters across one of the Turkish international airports, which is only a few miles from Syria in the Hatay city.

The video, which was broadcast by the organization recently through its accounts in social networking “Twitter” sites, said that “all flights were secretly taken, which includes men from several countries where jihadist organizations are active, why they are here.”

The recording pointed to the presence of two people from Mauritania, 4 people from Libya carrying their bags, and others from Egypt, Saudi Arabia and “Lester” British city.

Not only did the author of the report referred to the Turkish gateway, but also revealed smugglers working mechanism, and taking tourists from various countries of the world to take them through smuggling brokers into Syrian territory in preparation to use them in militant groups inside Syria and Iraq.

As stated in the video “Most travelers were rushing towards cars waiting for them as well as the presence of crowds from around the world, to begin their journey with a getaway across the road surrounded by safe houses” until delivering “fighters” to the Syrian party.

This new video of ISIS organization comes despite Istanbul’s recent announcement of its accession to the coalition forces to hit the organization in both Syria and Iraq, despite the reservation for years since the start of the events in Syria.

By opening “Incirlik” air base of NATO North Atlantic in front of the international coalition to fight ISIS led by the United States to push efforts to eradicate the organization in both Syria and Iraq, which came in response to the bombing, which occurred in the vicinity of “Soroj” border city near Kobani Syrian city.