You are here: Home / MidEastGulf / ISIS shaving off beards, recruiting kids and booby-trapping city ahead of Mosul offensive 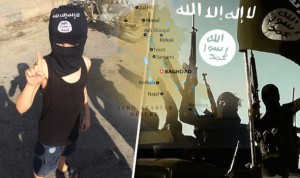 Desperate ISIS commanders have recruited children in Iraq’s second city to act as spies as the group’s prepares itself for a major onslaught that could signal the death knell of the extremists in Iraq.

Youngsters aged just eight are said to be patrolling the city armed with knives and guns to monitor for any informants.

Families have told how they have had to pretend their children are mentally ill to avoid having them recruited by the barbaric extremist group.

Mosul, home to up to 1.5 million people, has been the headquarters of ISIS’ self-declared caliphate in northern Iraq since 2014.

The battle for the city, expected to erupt later this month, will help shape the future both of the terror network and of Iraq.

The jihadis, who swept into Mosul two years ago as Iraqi forces fled, have rigged its five bridges with explosives, prepared car bombs and suicide attackers and stepped up surveillance, residents have said.

They are even changing their appearance in order to slip under the radar after the offensive begins, with militants reportedly shaving off their beards.

The same tactic was employed by the jihadists in the Libyan city of Sirte when the Islamist fighters cut off facial hair to blend in with civilians.

Hoshiyar Zebari, a former Iraqi finance and foreign minister, said: “They are digging in to fight for Mosul.

“They are more cautious, shaving their beards to blend in with the population and constantly moving their headquarters around.”

Mosul residents said the militants have also dug a two-metre-deep trench around the perimeter of the city to be filled with burning oil to make air strikes more difficult.

One resident said children as young as eight, sometimes armed with pistols and knives, have been deployed across the city to monitor and inform on the population.

The children recruit other children for the same task.

“I taught my seven-year-old son all about autism to pretend he’s mentally ill to avoid being recruited by Daesh [ISIS].

“They are desperate and they could force even children to fight once government troops are at the doors of Mosul.”

Mosul residents say they have turned to using older mobile phones without applications like WhatsApp or Facebook messenger because smartphones arouse suspicion among ISIS fighters, who are highly sensitive to technology which makes it easier to pass information about their operations to security forces.

Others say the jihadis have taken up positions on the rooftops of tall buildings on the edge of Mosul with night-vision binoculars to watch for anyone trying to escape.

Militants are also digging holes in the streets with to bury improvised explosive devices.

A Mosul resident said: “They are desperate, they look afraid, this is the first time they use their women in searching houses.

“Two days ago, I rushed to my house door after hearing repeated knocks and when I opened the door I saw three women in Islamic hijab showing only their eyes with three Daesh fighters behind them.”

The jihadis, fearing a major assault on the city, are now beginning to flee, first to the town of Tal Afar, also under ISIS control, or further on across the Syrian border.

The brutal tactics of ISIS were shockingly highlighted earlier this month when two Kurdish Peshmerga fighters were killed and two French soldiers killed after a booby-trapped drone exploded north of Mosul.

The drone blew up when Peshmerga fighters tried to lift it after it crashed to the ground.

The two wounded French soldiers were airlifted back to France for emergency medical treatment and one of them was fighting for his life.