You are here: Home / Europe / ISIS set to target Europe with Mustard Gas smuggled from Syria 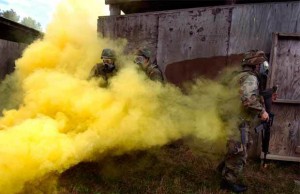 Islamic State is behind a spate of deadly Mustard Gas attacks in Syria – and may have enough of the killer substance to slaughter tens of thousands, The Daily Mirror can reveal.

The network may have access to 20 tons of the evil weapon and could smuggle it out of Syria and into Europe, a leading expert in chemical warfare has warned.

Retired Army Colonel Hamish de Bretton-Gordon told The Daily Mirror exclusively: “Evidence points to Islamic State behind the attacks and there could be more.

“There is evidence they used Mustard Gas, either stolen by Islamic State from Assad or – and this is a real game changer – Islamic State made it themselves.

“This is horrific and the west must act to stop Islamic State now because the threat from them just became much greater and they could take huge areas they have not conquered before.”

And Col de Bretton-Gordon warned IS could smuggle Mustard Gas to attack Europe, after finding a recipe on the ‘dark web’ – the murky and secretive area of the internet used by crooks.

He added: “It is not easy to make Mustard Gas but it is possible and a lone wolf could get the information off the internet and dark web.

“If you tried to buy the precursors in the UK or US you would most likely be picked up.”

“Could IS move Mustard Gas out of the Syria/Iraq theatre of war? That is the real issue I expect.”

Scores have died from chemical attacks in both Syria and Iraq in recent weeks and at the weekend Islamic State launched another suspected Mustard Gas attack.

Kurdish authorities fear a rocket fired at them by IS in northern Iraq this week contained chemical substances.

The Kurdistan Region’s Security Council said it happened north of Mosul on Monday (Aug 31) and one fighter was receiving treatment.

Col de Bretton-Gordon- who advises NGOs throughout Syria and elsewhere in the world- added: “The West is running out of time to do something about IS. We must act now.”

Yesterday the UN called for an international probe into chemical weapons use in Syria.

Dubbed a “cyotoxic agent” because of its extremely deadly nature Mustard Gas killed thousands when it was introduced by Germany and Britain in the First World War.

Syria denies using chemical weapons but the US and other Western nations have deep suspicions Assad’s regime originated the threat, dropping toxins in “barrel bombs” from helicopters.

The Jihadists claim they are distributing money to poor people in al-Qayrawan, a district of north west Iraq close to the border with Syria.