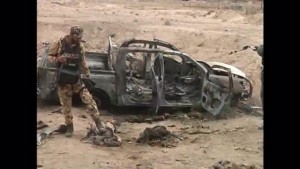 ISIS terrorist organization announced that one of its terrorist called ” Abu Dujaanah al- Jazrawi ” was killed in a suicide attack carried out against the Iraqi army forces and fighters of the Popular Mobilization Units (PMU) in Fallujah city in Anbar province.

According to Saudi “Ajil”, newspaper, the terrorist organization accounts published on social networking “Twitter” site, an image showing a young masked man said “he was a Saudi ” nicknamed Abu Dujaanah al-Jazrawi “, before he blow himself up in the strongholds of the Iraqi army, near the Technical Institute in Fallujah city in Anbar province”.