You are here: Home / Mediterranean / ISIS reveal arsenal of weapons at disposal of Egyptian supporters 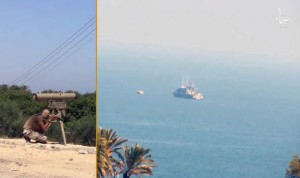 The heavily doctored video appears to show a jihadi firing a rocket at a naval patrol ship in the Mediterranean sea, causing it to burst into flames.

Footage of attack on the ship first emerged in July after the Egyptian military said a coastguard vessel had exchanged shots with militants just two miles off the coast of northern Sinai, an area bordering Israel and the Gaza strip.

The military said it suffered no casualties although it is understood several patrol workers suffered minor burn injuries.

The video also appeared to show militants laden with weapons and ammunition apparently targeting victims and causing explosions on roads and in built-up areas.

It is not clear whether the footage was filmed in the North African tourist destination.

It comes after the security at a number of popular tourist resorts in Egypt was increased following an attack by ISIS militants on a town just a few hours away.

Extra armed guards were drafted to Sharm El Sheikh and Hurghada after 50 Egyptian government troops were slaughtered in the Sinai province, a peninsula popular with British holidaymakers.

Egyptian tourist hotspots have been targeted by extremists in the past, with the country recently marking the 10th anniversary of the deadly terror attacks on Sharm El Sheikh, in which 88 people – including 11 Britons – were killed.

The Foreign Office issued a security warning for British tourists visiting Egypt following the Tunisia beach massacre in June in which 38 tourists – including 30 Britons – were killed.

The warning has sparked fears that Egypt’s tourist industry – which makes £3.7bn a year from 900,000 British tourists – could suffer like Tunisia did in the wake of the Sousse attack.

Many Britons have switched holidays booked in destinations such as Spain, Bulgaria, Turkey and Egypt amid fears of heightened terror threat levels across Europe and North Africa.