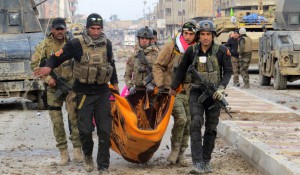 A retreat of the Islamic State (IS) in Iraq and Syria would increase risks of terrorist attacks, Paris Prosecutor Francois Molins warned on Friday.

“Paradoxically, the weakening of the Islamic State in Iraq, Syria area is a factor that increases the risk of attack,” Molins said.

“We can see in the history of terrorism when terrorist organizations are struggling in their own zone, they seek the opportunity to attack abroad,” he told Le Monde newspaper.

IS weakening could trigger a return to France of a large number of French jihadists and their families which, according to Molins, was “a worrying factor.”

About 700 French youth have already joined Islamist fighters in Iraq and Syria, according to official data.

France remains at high terror risk a month and a half after a man drove his truck into crowds of people celebrating Bastille Day in the southern city of Nice. A total of 86 people were killed in the attack. A few days later, two teenagers slaughtered a priest in a church in northern France. The Islamic State (IS) claimed responsibility for both attacks.