You are here: Home / Senza categoria / ISIS release pictures of their new gold coins they say will ‘break capitalist enslavement’ 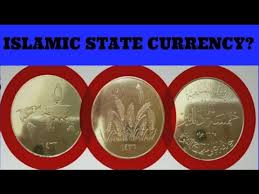 ISIS have released a new hour long video, showing off their latest propaganda tool – their very own coin currency.

The video, which includes a dreary and distorted history of world economics, shows the smelting of gold, silver and copper coins.

Dramatised by clips from Hollywood war films, the film accuses the US of ‘confiscating Americans real wealth through an executive decree’ with the introduction of the Gold Reserve Act in 1934.

Yet despite their glorification of their new currency, ISIS have no other means to pay their band of jihadis except through the use of US dollars.

Local trade continues to be done through the use of local currency or more commonly US dollars, due to the stability of the western currency.

The jihadi group claim in the video that one 21-carat one dinar coin will weigh 4.25 grams and it will be worth an equivalent to $139 due to its weight in gold.

The militant group claims that the currency will never lose value in comparison to paper money. Due to ISIS being a terrorist group, it will not be able to use the coins to trade outside its territory.

They also claim to have created three denominations of silver dirhams as well as two of copper coins, known as ‘fulus’, which will be used for ‘smaller transactions.’

One of the coins has a detailed image of corn husks blowing in the wind. The corn grains appear to be an attempt by ISIS to show how the brutal jihadist group provide for their people.

In reality, residents in Mosul, Iraq’s second largest city, have complained about food shortages amid rising prices since the arrival of ISIS in June 2014.

Another coin, labelled with the Arabic number five, has a map of the world and the date written neatly in Arabic.

The narrator claims that ISIS will spread across the world, conquering the whole of Europe.

Several months ago, ISIS supporters released several images of gold coins, claiming the currency would be ready in time for Eid.

It remains to be seen whether ISIS will ever be able to enforce the currency across all its territories, especially when its fighters continue to be paid in US dollars.

The news of ISIS’s new media release comes as the WorldPR Global Leadership Ranking 2015 placed ISIS higher than the Vatican for its international brand recognition.

Despite the Vatican’s 2,000 year existence, the relatively new group ISIS have managed to capture the world’s attention through their harrowing videos and victories on the battlefield.

The video shows an ISIS fighter, fluent in Arabic and English, showing the gold coins to residents in Mosul as well as ISIS fighters.

Upon being handed the small gold coin, one elderly man describes it as being ‘better than paper money in the bank.’

Following lengthy footage of the creation of the coins and staged shots of showing off the currency, the video ends with a lengthy nasheed in English.

The news just over a year after ISIS sacked Mosul’s main bank when they stormed the city in June 2014.

It is believed as much as £256 million worth of cash and a considerable amount of gold bullion was stolen from the bank.

The bank had been left vulnerable to ISIS after Iraqi forces provided little resistance and fled the city.