You are here: Home / Africa / ISIS recruits from Nigeria, as Police intercept 13 in Kano 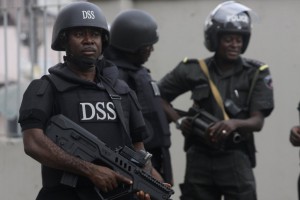 Kano State Police Command has paraded 13 indigenes of Edo and other southern states who were intercepted on their way to war torn Libya in a small local government area in Kano State.

The alleged ISIS recruits were in possession of fake traveling passports of Libya. The passports were found to be fake.

People have expressed concern over the security challenges and the possibility of ISIS taking advantage of the Trans-Saharan route to recruit from Nigeria.

The Kano State governor, Dr. Abdullahi Umar Ganduje, expressed fear that the suspects may be joining internationally acclaimed terrorists based in Libya.

Ganduje alleged: “The 13 suspects may be joining terrorists network in Libya. I personally would like to see them investigated thoroughly including the arrest and interrogation of their recruiter who issued them fake Libyan passports”.

In his remarks, the state police commissioner, through his spokesman, DSP Magaji Musa Majiya said the suspects were intercepted by the police on road patrol as they are passing through Kiru local government area of Kano State.