You are here: Home / Africa / ISIS recruitment: “Beware of those who arrange visas” – NIS warns Nigerians 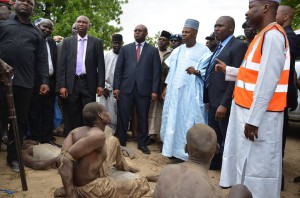 The Nigeria Immigration Service, NIS, said there is a syndicate in Nigeria that recruits young Nigerians for the terrorist group, Islamic State of Iraq, Syria, ISIS.

NIS disclosed that the syndicate process travelling documents and visas for those it had recruited for ISIS.

It said ISIS’s strategy was promising youth a way out of the unemployment in the country.

Last week, two Nigerian youths from Kano – identified as Imran Kabeer and Sani Jamiliu – were detained by the Punjab Police in India on suspicion of getting set to travel to Iraq to join ISIS.

Reacting, NIS Public Relations Officer, Emeka Obua, said the service had started intense scrutiny of travellers to ensure radicalised citizens do not succeed in traveling out.

He said some Nigerians escaped with help of individuals who arrange visas as well as porous borders.

His words: “Nigeria is a catchment area for recruiters because of the high number of jobless people in the country.

“The terrorist group has a syndicate that arrange travel documents, visas, ticket and money for their recruits.

“To counter this, the NIS now engages in intense profiling of travellers. We have always had problems of Nigerians going abroad for greener pasture.

“We look at the age of the intending traveller and the person he is travelling with, put them by the side and profile them thoroughly.”

Obua called for recruitment of more immigration personnel as well as assistance of Nigerians in the area of vital information that would help in apprehending the syndicate and suspicious individuals.