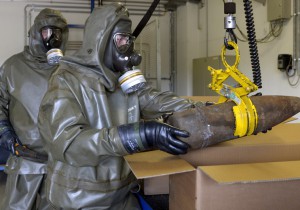 The terrorist group Isis is recruiting “highly trained professionals” to make chemical weapons – and has already used them in an attack.

Speaking to the Australia Group, which is composed of nations against chemical weapons, she said: “Da’esh [Isis] is likely to have amongst its tens of thousands of recruits the technical expertise necessary to further refine precursor materials and build chemical weapons,” Ms Bishop added.

Ms Bishop’s speech is the latest concern that Isis is attempting to acquire nuclear and chemical and biological weapons, after India warned the extremists could obtain a nuclear weapon from Pakistan.

It was reported in March that Isis had been attacking Iraqi soldiers with roadside bombs containing chlorine gas in fighting around Tikrit, after footage emerged showing plumes of orange smoke emerging for the bombs.

It follows similar allegations that the extremists had released toxic gases in the eastern district of Kobani, during the siege of the town on the Syrian border, although it could not be confirmed.

Ms Bishop added: “Apart from some crude and small scale endeavours, the conventional wisdom has been that the terrorist intention to acquire and weaponise chemical agents has been largely aspirational.

“The use of chlorine by Da’esh [Isis], and its recruitment of highly trained professionals, including from the West, have revealed far more serious efforts in chemical weapons development.”

They seek to undermine and overthrow that order – and as we have seen, are prepared to use any and all means – any and all forms of violence they can think of to advance their demented cause.