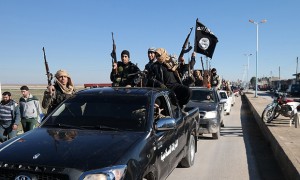 Islamic State ran a sophisticated immigration operation through a Syrian border town with Turkey until its defeat in the area by Kurds this summer, documents obtained by the Guardian suggest.

Passenger manifests dated between December 2014 and March 2015, which were seized by Kurdish commanders in Tel Abyad, carry the stamps of Isis’s “department of immigration” and “department of transport”. They show that busses passed through the town having submitted the names, dates of births, ID numbers and even birthplace of scores of travellers.

Most of the registered passengers were travelling from within Isis-held territory. One manifest shows a group of five male and female Tunisians aged 23-36 entering the area. They are registered as coming from Kairouan, a city south of the Tunisian capital, Tunis, known to be a hotbed of radicalism. Kairouan is where gunman Seifeddine Rezgui, who massacred 30 British tourists on a Sousse beach in June, was studying.

Tunisia is the biggest source of foreign fighters entering Syria. In October, the Tunisian government estimated that 6,000 fighters had left Tunisia headed for the conflict.

Turkey has long said that it is unable to secure its 500-mile border with Syria. In January, as Isis was logging people passing in and out of Tel Abyad, the Turkish prime minister, Ahmet Davutoğlu, told the Independent that sealing the border would be impossible. “We cannot put soldiers everywhere on the border. In any case, there isn’t any state on the other side [of the frontier].” he said.

A Turkish diplomat speaking to the Guardian last month re-emphasised how difficult it was to stop fighters sneaking across the border at night.

The seven passenger manifests, countersigned by travel agents in Mosul, Iraq, and Raqqa, Syria, suggest there was for a period of formalised passage on the Syrian side of the border.

The manifests were sent to the Guardian by Syrian Kurdish force’s spokesman, Redur Xelil, and bear the same stamp marks and logos as other Isis documents the newspaper has been able to verify. Spanning four months, they meticulously record 70 passengers, 28 of whom were under 18, including seven babies.

Some busses were detailed as heading to Isis stronghold of Raqqa, about 40 miles south of Tel Abyad, while others were full of families from Mosul, which Isis conquered last year.

The border crossing remained open until Kurdish forces took control of the town in June, at which point Turkey promptly sealed it. The crossing remains closed, a government official confirmed.

Turkey, a member of Nato, has been under international pressure because of its border with Syria, as concerns mounted over the ease with which Isis fighters appeared to be able to enter and leave territory held by the group.

In July, Davutoğlu vowed to increase border security after an Isis bombing killed more than 30 youth activists. The pressure to further increase security has mounted since the Paris attack.

Speaking in France shortly after the attacks in November, Barack Obama said he had had “repeated conversations” with his Turkish counterpart, Recep Tayyip Erdoğan about border security, adding: “We’ve seen some serious progress on that front, but there are still some gaps.” The US president mentioned a 60-mile stretch that he said continued to serve as a transit point for fighters and Isis fuel exports.

David Phillips, an academic at Columbia University and author of two recent research papers into links between Turkey and Isis, alleges that the country “knows the movements of all persons and can control the flow across the border if it chooses”.

He said there was “a steady stream of vehicles, individuals, weapons, financing, oil going back and forth”, adding: “It’s not like people are putting on their hiking boots and crossing over rough terrain. There’s an extensive surface transport network which is highly regulated and controlled … on both sides of the border.”

Academic researcher Aymenn al-Tamimi, an expert on examining Isis documents, said he had no doubt about the authenticity of the manifests. “The documents… coincide with other documents illustrating daily bus routes within Islamic State territory. Though private companies provide the actual transportation, the Islamic State bureaucracy is responsible for authorising and overseeing the routes,” he said.

Responding to the Guardian’s claims, a senior Turkish government official said Turkey regarded any Tunisian entering Isis controlled territory as a “foreign fighter”. But he questioned whether the documents proved whether those arriving in Tel Abyad had done so using the legal road crossing or through other means.

The official said Turkey was doing everything it could to stop the influx of foreign fighters, including cracking down on recruitment and logistic networks such as travel agents mentioned in the documents.

Turkey arrested 207,437 people for illegally crossing the border between 1 January 2014 and 1 November 2015, he said, adding that the country hosts more than 2 million Syrian refugees as part of its “open door” policy.