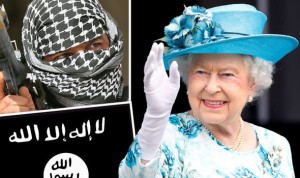 The head of royal family security announced Thursday that Queen Elizabeth II of England and her family were still planning to lead festivities for VJ Day, celebrating the 70th anniversary of the end of World War II, despite threats of assassination or bombing from the Islamic State militant group. Supporters of the Islamic State group, also known as ISIS or ISIL, said over the weekend they were planning an attack on the queen at the ceremony in an exclusive report published by Sky News.

VJ Day, which is scheduled for Saturday, commemorates the day when Japan surrendered to the Allied Forces in 1945, ending World War II. The day has long been celebrated as a symbolic moment of freedom in countries across Europe as well as in the United States.

ISIS has taken over vast portions of Iraq and Syria in an attempt to impose worldwide Sharia law, or conservative Islamic regulations. The group has terrorized populations across the Middle East and threatened attacks in the U.S. and Europe. In the past year, it has begun to garner support from some European Muslims, several thousand of whom have tried to cross into Syria to join the group.

“IS already has a number of potential bombers in the U.K. – some of whom have been trained in Syria and are ready to attack,” reported Sky News, citing firsthand ISIS allies within the U.K. Authorities estimated that at least 700 British nationals have joined or attempted to join ISIS in Syria. One of the most well-known members of the terrorist group was “Jihadi John,” a British national-turned-ISIS fighter who beheaded several journalists and aid workers in highly-publicized videos.

Despite the threats of violence against Queen Elizabeth, she and her family are expected to go ahead with plans to lead the celebrations this weekend. When asked about how Queen Elizabeth, Prince William and Princess Kate were feeling ahead of the coming weekend’s celebrations, the royal head of security told Express, “[They have] a very determined attitude.”