You are here: Home / Mediterranean / ISIS propaganda machine is sophisticated and prolific, US Officials say 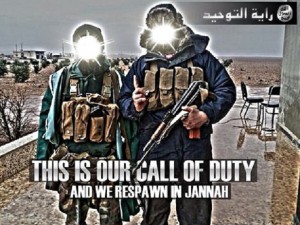 ISIS terrorists are expertly using hip hop music, video games and even children to successfully recruit young people to their violent cause. That assessment comes today from the FBI and from top U.S. counterterrorism officials, who say the ISIS social media machine is sophisticated, prolific, and unprecedented.

“They are shooting out into the ether-sphere thousands and thousands of messages a day, over 90,000 a day and it’s to millions of people across the globe,” John Carlin, the head of the Justice Department’s National Security Division told ABC News Correspondent Pierre Thomas. “What they are trying to do is to convince young people to go slaughter civilians in a vicious war.”

The online messaging is slick — far broader and more subtle than the vicious beheading videos the public is too familiar with, according to Scott Talan, a social media and marketing professor at American University. Talan viewed about a dozen ISIS propaganda videos with ABC News’ Pierre Thomas, and said he is shocked by the quality of the messaging the terror group is putting out.

In one video, ISIS produces its own, twisted version of the popular “Grand Theft Auto” video game. While ISIS fighters gun down victims on the screen, the message flashes, “Your games — We do the same actions on the battlefield.”

“So it’s the reverse of our culture, where we say ‘escape real life and play a game.’ They’re saying, ‘escape your life, come play a real game with real consequences,'” Talan said. “They are using products from American culture — video games — for their purposes, and taking and making a message that works for them.”

And of course Westerners going to fight against ISIS have learned the hard way that the consequences are very real. Many, including a few Americans, have been killed in action. Others have been turned into propaganda mouthpieces for ISIS, or forced into barbaric acts of violence, according to the Justice Department.

Talan said many of the ISIS messages are designed to appeal to young people who are craving acceptance. For example, he said, one hip hop music video pushed out by the terror group uses a doctored “Uncle Sam” poster to say “We want you.”

“For people on the edge, this could have a lot of resonance,” Talan said. “You’re speaking to them in a language they understand … video, imagery and music. Then this message comes in about ‘We want you.’ People do want to belong to tribes. This is saying, ‘join our tribe.'”

Talan noted that some of the ISIS videos make direct appeals to women to come to the “Caliphate.” In one, a male fighter says, in English, “Sisters, we have houses, we have security … come.”

But once there, life is unspeakably brutal for women, Assistant Attorney General John Carlin said, noting they are routinely forced into marriage or enslaved — and there is no coming home again.

Another Western advertising ploy that ISIS has adopted is the use — or perhaps the abuse — of children, Talan noted.

In one ISIS video posted on Twitter, soldiers hand out ice cream to a group of excited kids. A few scenes later, you see some of the young boys grabbing AK-47’s, waving them above their heads, and chanting ISIS slogans.

“It is disturbing, but there’s a reason children are used.” Talan said. “Madison Avenue uses it all the time. … It touches empathy. It gets people to say, ‘Aww.” It puts your defenses down — it makes you want to pay attention and feel human.”

But for the children of ISIS, the Justice Department’s John Carlin said, life is a grim series of bearing witness to barbaric atrocities and slaughter, and very often, the loss of family members and loved ones to the continuing violence.

But what’s frightening, Carlin said, is that despite ISIS’ well-documented brutality, its social media campaign seems to be working right here in the United States. New recruits inspired by ISIS messaging are being discovered in the U.S. with increasing frequency — at least 55 in the past two years, according to the Department of Justice. And Carlin said in most of these cases there is a common thread.

“In almost every one of these cases, we’ve seen social media involved.” he told Pierre Thomas. “Before the advent of social media … how would you reach into the basements and bedrooms of American homes?”

Counterterrorism officials acknowledge privately that the U.S. government is struggling to meet this new threat. But Carlin said he feels confident that ultimately, ISIS and its slick propaganda machine will be exposed by the ugly reality on the ground.