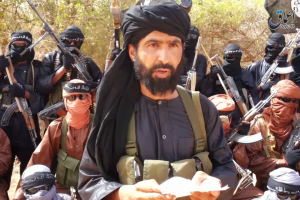 In Mosul ISIS is separated by a few miles from Iraqi and Kurdish security forces ready to take back the terror group’s main stronghold in Iraq, but elsewhere in the world, the Islamic State is still collecting endorsements.

The group’s Amaq News Agency reported Monday that the Mali-based al-Murabitoun Brigade has pledged allegiance to ISIS leader Abu Bakr al-Baghdadi and said it is now an affiliate of the Islamic State.

A new video featuring Abu al-Walid al-Sahrawi, the leader of al-Murabitoun, standing with a dozen masked gunmen was published along with the announcement. “We call on all Muslims to join the Caliphate and pledge allegiance to the Caliph of Muslims and support of Caliphate, and achieve unity in the face of the international Crusader campaign against Islam and Muslims,’ al-Sahrawi says in the video. The scenes conclude with a pledge of allegiance ceremony and the gunmen shouting ISIS’ motto: “Remaining!”

Al-Sahrawi is a prominent militant leader in North Africa who also led another jihadi group in west Africa that took part in the capture and seizure of Gao during the conflict in northern Mali in 2012. He had already asserted his loyalty to ISIS in May 2015, a move that was dismissed at the time by al-Murabitoun co-founder Moktar Belmoktar. Belmoktar remained loyal to al-Qaeda, and the two men went their separate ways later.

It was a boon to ISIS supporters online, who celebrated the news on Telegram channels. One declared that “after the expansion into Mali, the armies of the Caliphate will burn the coasts of the Mediterranean, and will conquer Rome soon.” Others shared a map showing ISIS flags on African countries including Libya, Algeria, Nigeria and Mali.

ISIS already has a presence in African nations such as Nigeria, where Boko Haram pledged allegiance to the Islamic State last year and called itself the Islamic State’s “West Africa Province.” There are also bands of ISIS fighters said to be part of a “Sinai Province” that stretches across north Africa, from Egypt to Libya.