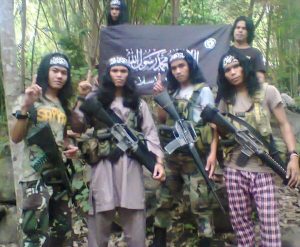 Militants in the southern Philippines have beheaded two Vietnamese sailors held hostage for eight months, the military said according to alaraby.co.uk.
Philippine troops found the remains of the two hostages early Wednesday morning on the island of Basilan, which is held by the Islamist State group-linked Abu Sayyaf Group militia, military spokeswoman Captain Jo-Ann Petinglay said.

“This is a desperate measure of the Abu Sayyaf Group because they see they have no gains from their kidnap-for-ransom activity,” Petinglay told AFP.

Abu Sayyaf was formed in the 1990s with seed money from al-Qaeda founder Osama bin Laden.

It fragmented into a number of militias with some kidnapping foreigners for ransom.

Fighters from this group were among a number holding parts of Marawi, an important city in the southern island of Mindanao which has a significant Muslim population.

The Philippines army launched an offensive to retake the city, although some militants continue to hold parts of Marawi.

The offensive has claimed more than 460 lives and displaced nearly 400,000 people since it began in May.

There have been reports of massacres and rape used by the militants against the non-Muslim population.

The two Vietnamese were seized last November along with four other Vietnamese crew members of a vessel that was boarded by the militants off the southern region of Mindanao, the military said.

One of the six crewmen was rescued last month and three remain in captivity, Petinglay said.

Abu Sayyaf militants are holding a total of 22 hostages, including 16 foreigners, according to Petinglay.

The Abu Sayyaf is known to behead its hostages unless ransom payments are made.

German national Jurgen Kantner, 70, was beheaded in February after the kidnappers’ demand for 30 million pesos ($600,000) was not met.