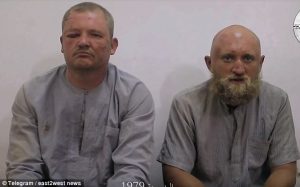 Two suspected mercenaries from a ‘private army’ used by Vladimir Putin in Syria have been captured by ISIS, according to video claims.

They can be seen wounded and handcuffed in a video, explaining where they are from in Russia and where they were captured.

They are believed to be mercenaries belonging to the so-called Wagner private army, allegedly deployed by Moscow in hot spots to lower casualty numbers among regular forces. However, the Russian Defence Ministry has strenuously denied losing two soldiers.

The pair were held by the jihadists around Deir Ezzor, the last ISIS stronghold in the country.

In the video, the bearded man can be heard saying: ‘I am Zabolotny, Roman Vasilievich, born in 1979, in Rostov region, Aksaisky district, Passvet village.

‘During counter attack of ISIS in the area of Cholya settlement I was taken prisoner of war.

‘Surkanov, Grigory Mikhailovich was captured together with me, born in 1978, in Domodedovo district.’

In fact the second man has been named as Grigory Tsurkanu. The pair are now in grave danger.

‘Our experience of watching this conflict tells us that Wagner private army mercenaries are the first to fight,’ he said.

‘We think it is a strategy of the Defence Ministry of Russia: sending mercenaries to the hottest places, we avoid losses among official soldiers and keep the image of a successful combat operation.’

A Russian Defence Ministry spokesman said: ‘All servicemen of the Russian Armed Forces in the Syrian Arab Republic are safe and in a good condition and are performing their designated tasks.’

The group is used despite mercenaries being illegal under Russian law.

Its deployments are deniable by Putin’s military forces