You are here: Home / MidEastGulf / ISIS or Kurdish rebels: who is Turkey really fighting anyway? 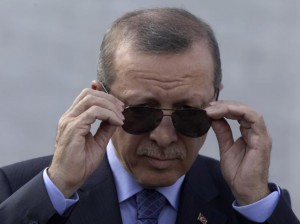 After a year of playing a muted role within the U.S.-led coalition fighting ISIS, Turkey is now actively engaged in airstrikes against the terror group. But ISIS isn’t Turkey’s only target.

Turkey is genuinely concerned about the terror threat bubbling away on its border, but ISIS has also given President Recep Tayyip Erdogan a convenient cover to crack down on Ankara’s long-time nemesis: Kurdish rebels from the Kurdistan Worker’s Party (PKK).

Erdogan is now waging parallel campaigns — one against ISIS, and one against PKK rebels in southeast Turkey and northern Iraq. The strikes on PKK targets have brought an end to a two-year ceasefire between Turkey and Kurdish rebels, prompting the latter to cry foul.

Tension between the PKK and the Turkish government goes as far back as the 1980s, when the PKK demanded the setting up of an independent Kurdish state. Although the group later revised its goals to demand more Kurdish autonomy instead of independence, Ankara continues to regard the PKK as an enemy of the state — and the two sides have been engaged in an intermittent cycle of violence for more than three decades.

But the deepening of the Syrian crisis presented Ankara with a fresh opportunity to renew the fight against Kurdish dissidents in the southeast. In 2012, Turkish troops used the pretext of its neighbor’s civil war to attack Kurdish areas near the Syrian border. This pressure by the Turkish government pushed the PKK to agree to a ceasefire in 2013.

ISIS: “A convenient tool” to weaken the PKK

Since then, Turkey has seen ISIS as a useful way to put pressure on the PKK. Turkey mostly turned a blind eye to foreign fighters crossing its border to join ISIS and other jihadist groups in Syria –partly because it saw such groups as a convenient tool to weaken the PKK.

This strategy contributed to the strengthening of ISIS, and planted the seeds of a jihadist problem on Turkish soil. Turkey found itself unable to confront ISIS fully for fear of retaliation at home, while at the same time, some members of the Turkish government appeared to be sympathetic towards the jihadist group.

While Turkey lingered in the background of the Syrian conflict, the PKK stepped up and asserted itself as it began to protect Kurdish territories from ISIS.

The PKK’s armed offshoot in Syria, the YPG, did the same in northern Syria — notably in Kobani — enabling the Kurds to drive the extremist group out of territories near Turkey’s southern border that the YPG then took over.

The growing strength of the PKK at home and the YPG in Syria has become a cause of concern for Turkey. A suicide bombing by ISIS in the Turkish town of Suruc in July prompted the military to launch an offensive in the mostly Kurdish area. But Kurdish residents blamed the bombing on the government, accusing Ankara of facilitating the bombing in order to resume its campaign against the PKK. The government responded by raiding PKK areas and arresting hundreds of people — including militants from the far-left DHKP-C group, which Turkey and the U.S. regard as a terrorist organization

The precarious Turkey-PKK ceasefire then collapsed. Now, seemingly retaliatory attacks have popped up in different areas around Turkey, including one outside the U.S. consulate in Istanbul that the DHKP-C claimed responsibility for.

A Pandora’s Box of headaches for Turkey

The attack on the U.S. consulate came hot on the heels of Washington’s sending of six F-16 fighter jets to a Turkish airbase in the south, following months of U.S. pressure on Turkey to allow the coalition to use its airbases.

But at a time when Turkey is openly attacking the PKK, the U.S. jet shipment is being seen as an indirect endorsement of Turkey’s actions by the Kurds, who are deeply suspicious of Ankara’s ulterior motives in the fight against ISIS.

Turkey’s opportunistic attacks on the PKK and the DHKP-C has therefore opened up a Pandora’s Box of headaches for Ankara.

Instead of capitalizing on the PKK’s fight against ISIS, Turkey’s actions are pushing the PKK and the DHCP-C closer.

Meanwhile, America’s signaling of support for Ankara over its PKK offensive is exposing Turkey to revenge attacks.

Everyone has a common enemy in ISIS. But Turkey’s decisions, seemingly blessed by the U.S., are marginalizing the PKK — creating another enemy that resources have to be diverted towards and ultimately jeopardizing the coalition’s goal of eliminating ISIS.