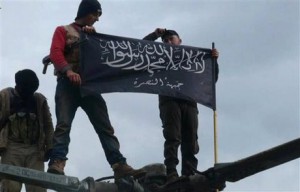 Gunmen affiliated to al-Qaida group al-Nusra Front and the Islamic State of Iraq and the Levant (ISIL) reportedly tried to provoke Syrian refugees, who are settling in the northeastern border town of Arsal, to join al-Qalamoun battle.

According to al-Akhbar newspaper published on Friday, several Syrians gathered in al-Sabil and Tariq al-Jammala in northeastern Arsal, two kilometers from al-Masyada crossing, to respond to the two groups’ calls and “aid the jihadists on the outskirts.”

A witness told the daily that “al-Nusra Front gunmen have been trying since Wednesday to convince Syrian refugees to join the battle and head to the outskirts to battle Hizbullah and the Syrian forces on the outskirts of Assal al-Wared and Ras al-Maara.”

The control of the area on the outskirts of Assal al-Wared came following heavy clashes with al-Nusra Front, it said in a statement.

The Britain-based Observatory stressed that there were casualties from both sides.

Hizbullah’s Secretary General Sayyed Hassan Nasrallah said in a televised speech late Tuesday that his group will attack militants in Qalamoun, stressing that “time will tell” when the battle will become full blown.

He added that there will be no formal announcement before the widely anticipated battle begins.

Nasrallah vowed that his group will continue fighting in Syria along with President Bashar Assad’s forces.

Fighters linked to ISIL and al-Nusra Front in the Syrian al-Qalamoun have been allegedly mobilizing and moving closer to the border with Lebanon ahead of a battle along the country’s eastern border.

The Lebanese army frequently clashes with the militants in their hideouts near the Syria border.

The IS, which controls several areas in Syria and Iraq, aims to spread to Lebanon as its fighters position in the outskirts of Bekaa towns bordering Syria and the Lebanese army is in adamant efforts to stop their efforts to infiltrate the country.

Despite ideological similarities, the two groups are opposed and in conflict with each other in other parts of Syria, particularly in the north.