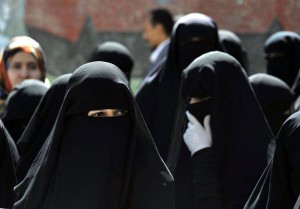 Quoting a secret report, France Info said 220 women joined the holy war waged by the Islamic State a figure which has kept increasing in the last 2 years.

France Info calculated that 164 left up to September 2015 and that the number has reached the figure of 220 only three months later.

One-third of these women converted to Islam, compared to one-sixth of men.

According to the report, 600 French Jihadists have been counted as Daesh recruits up to December and the proportion of women is on the rise, from 10% in 2013 to the current 35% .

At the moment, these women are not active combatants but travel to Syria to get married or join their husbands.