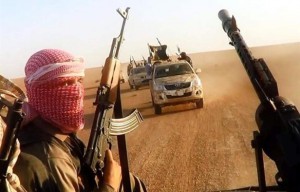 ISIS has been mobilizing equipment and fighters on a large scale for an upcoming operation to seize the last-two large regime controlled areas in the urban center of Deir Ezzor, according to All4Syria.

The anti-regime outlet reported Wednesday that since the beginning of the week ISIS has been undertaking preparations to attack the Jawra and Qusour neighborhoods of the city located on the western banks of the Euphrates.

The report added that ISIS has dubbed the upcoming operation the “Battle of Arafah” in reference to the Muslim Holy Day that marks the second day of the Hajj pilgrimage to Mecca, which in 2015 falls on September 23.

“Columns of ISIS vehicles headed to Syria from Iraq via the border town of Qaim have been sighted entering Syria from the desert despite intensive over-flights by coalition warplanes,” All4Syria cited activists as saying.

“The group has mobilized many of its members and readied its heavy machinery to begin the battle,” the report added.

“There is news that the group intends to enforce mandatory recruitment on the sons of Deir Ezzor province, in a bid to mobilize as many fighters as [possible].”

The Syrian regime has managed to maintain its presence in the city of Deir Ezzor despite the rebel takeover of the rest of the surrounding province in 2013. One year later, the eastern Syrian region was seized by ISIS.

The regime holds most of the city’s neighborhoods along the western banks of the Euphrates—including the Jawra and Qusuor neighborhoods—while ISIS has established a bridgehead in the center of the city as well as outside of the airbase to the southeast.

In early May, ISIS launched a new offensive against regime troops holding out in the city, the latest in a series of campaigns against the Syrian army that began in mid-2014.

Last fall, the extremist group had failed in a bid to seize the military airport and the city’s industrial area, as well as Huweijat Sakr, an Island on the Euphrates River, which runs through the middle of Deir Ezzor.

Fierce back-and-forth fighting has since raged in the city, with the regime and ISIS launching a series of attacks and counterattacks against each other.

Much of the fighting has focused on the military airbase to the southeast of the city, where ISIS launched a renewed attack in mid-September that reportedly brought them to the gates of the installation.