You are here: Home / Europe / ISIS military defeat will ‘increase terror risk’ in Europe
Losing ground in Iraq and Syria, European members of the Islamic State group might begin returning to their home countries and carrying out attacks, France’s top anti-terrorism prosecutor said 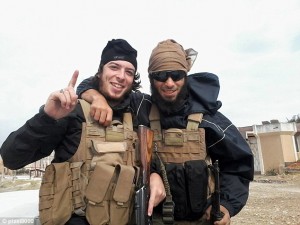 “We see clearly in the history of terrorism that when terrorist organisations are in difficulty on their own turf they look for an opportunity to attack abroad,” Molins said in an interview with French daily Le Monde.

Molins added that the increasing military difficulties faced by the IS group could see more French jihadis returning with their families.

Regarding the returning jihadis, the prosecutor said that the “hundreds” of women who will return from Syria in the coming months will face a greater level of scrutiny, as their potential danger was previously underestimated.

French authorities had probably been wrong “at first to say that they were just following their husbands and that they were restricting themselves to domestic chores in Syria”, he said.

“Now they are systematically arrested when they return and taken into custody.”

Molins said 59 women have been charged in France, of whom 18 were serving prison sentences.

The prosecutor also noted a rise in the number of radicalised girls in France “with very worrying profiles”.

“They are sometimes behind terrorist plots which, on an intellectual level, are quite far along,” he told the paper.

Twenty-three boys and 12 girls under the age of 18 are currently facing charges in France for terror-related offences.

Molins said he was worried about the potential radicalisation of young teens who had been taken by their parents to Syria or Iraq and might have appeared in IS execution videos or undergone military training.

“They are going to be real time bombs,” he warned.

He estimated that around 20 minors were currently fighting alongside IS militants in Syria or Iraq.

Around 700 French citizens are currently in conflict zones in Syria and Iraq, Molins said.

IS claimed responsibility for the November 2015 attacks on Paris that killed 130 people and the group said one of its followers drove the truck in the attack on the Nice waterfront in July in which 86 people died.