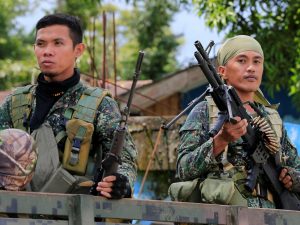 Around 300 Isis militants stormed a primary school in the Philippines, taking civilians as human

shields as they engaged government troops in a gunbattle, like reported by independent.co.uk .

The pro-Isis militants, among them members of the Bangsamoro Islamic Freedom Fighters (BIFF), stormed the school in Pigcawayan town in North Cotabato province on Mindanao island.

They took five civilians as shields during their retreat, the military said.

There were no casualties and no students were taken hostage, Brigadier General Restituto Padilla said, discounting earlier reports some children were being held by the fighters.

However, he said the military was investigating whether the five civilians were still with the militants.

“It’s already resolved,” Mr Padilla said in a regular briefing. “They’ve withdrawn, they are no longer there. The school area is again safe. The troops are in pursuit mode.”

Witnesses around a kilometre from the school said they could hear gunfire. Troops were preventing anyone from getting closer.

Abu Misry Mama, a spokesman for the BIFF, told Reuters the militants had taken civilians to a place safe from the crossfire, and did not intend to hold them hostage.

Asked if they would be freed, Mama said: “Yes. We’re not kidnappers.”

On another part of Mindanao, fighting between government troops and pro-Isis militants for control of MarawiCity has entered its fifth week.

Philippine troops, backed by airstrikes and artillery, remain involved in the offensive to wrest back control of villages and the business district.

The US military in recent weeks deployed a P3 Orion aircraft to provide surveillance and intelligence to troops battling more than 100 gunmen holding an unspecified number of hostages in four remaining Marawi villages. Pigcawayan is 190 km (120 miles) south of Marawi City.

Mr Padilla said the incident at Pigcawayan was not related to the fighting in Marawi.

“This has come from a group that has long committed harassments,” he said.

The seizure of Marawi and the dogged fight to regain control of it has alarmed Southeast Asian nations which fear Isis – on a backfoot in Iraq and Syria – is trying to set up a stronghold in the Muslim south of the mainly Roman Catholic Philippines that could threaten the whole region.

President Rodrigo Duterte visited a school where people who fled from Marawi are being housed and apologised for their plight, especially since it was Ramadan.

“I will help you, I will rehabilitate Marawi, it will be a beautiful city again,” he said at the school in Iligan City, about 40km (25 miles) from the battle zone.

Mr Padilla said the military aimed to prevent the conflict from escalating after Ramadan ends. “We are closely watching certain groups and we hope they will not join the fight,” he said.

Some Muslim residents of Marawi said other groups could join the fighting after Ramadan.

“As devout Muslims, we are forbidden to fight during Ramadan so afterwards, there may be new groups coming in,” said Faisal Amir, who has stayed on in the city despite the battle.

At least 258 militants, 65 soldiers and policemen and 26 civilians have been killed.