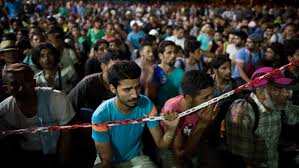 Home Secretary Theresa May was alerted to the scam within the last fortnight by a Tory MP.

Intelligence experts fear jihadists could use the documents to seek sanctuary on the continent before launching atrocities.

He said: “What better way to get a terrorist into the West amidst all this chaos?”

He was tipped-off to the potentially lethal fraud by a “very distinguished” constituent who had been in China on business for “many, many years”.

Mr Drax “immediately” passed on the warning to Mrs May.

Meanwhile, a senior Tory has accused David Cameron of blocking a Commons debate on the refugee crisis.

Sir Bill Cash claimed the Prime Minister had “interfered” in a bid to thwart MPs tackling the issue.

The European Scrutiny Committee Sir Bill chairs has been pushing for a full Commons debate on the situation.

He told last night’s committee meeting: “It has come to my attention that No 10 have been interfering in this process and if that is the case, it would not be a good idea for them to continue to do so.”

Appearing before MPs, Immigration Minister James Brokenshire insisted there had been “a number of debates in one form or another” in early September, focusing on migration across the Mediterranean.

He added: “While we have been unable to schedule the debate that had been specifically requested by this committee, I think there have been other means by which the House has not simply been able to ask questions, buts also to express a view as well.”

A No 10 spokeswoman said she was “not aware of any discussions” about blocking MPs from discussing the issue.

MPs are expected to vote later this year on extending RAF bombing raids against Islamic State from Iraq and into Syria.

Supporters believe that tackling the terrorists in their Syrian strongholds would ease the refugee crisis.

But SNP Westminster leader Angus Robertson yesterday warned of “growing scepticism about the drumbeat towards war”.

Speaking at Prime Minister’s Questions, Mr Cameron said the “consequences of non-intervention are also worth considering”.

He has repeatedly stressed he will only seek Commons approval for air strikes in Syria if he believes he can win a vote.

Up to 30 Tory MPs are likely to rebel, meaning the Government would lose unless Mr Cameron can persuade enough Labour MPs to back him.