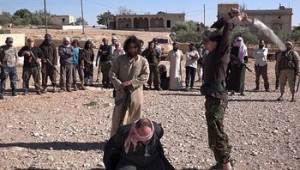 Terrorist group of ISIS executed on Wednesday an Iraqi man in Mosul city for helping a group of Yezidi girls –who have been taken by ISIS as sex slaves– to escape, local sources reported.

Muhammad Abdullah al-Jabouri, member of the Jabour tribe, was captured by ISIS militants while trying to help several Yezidi girls escape from the group’s brutality near al-Houd district in Mosul.

“Al-Jabouri was beheaded in central Mosul after being charged of treason,” human rights activist and lawyer Hassan al-Allou said in Mosul.

The source confirmed that the Yezidi girls who tried to flee were arrested by the militants in Mosul suburb and were returned to ISIS headquarters in the city.

“The man was trying to rescue those innocent young girls from the fist of those brutal militants. His execution has shocked the people of Mosul for he is a renowned member of al-Jabour tribe,” al-Allou said.

ISIS militants had taken over the Yezidi region of Shingal in northern Iraq in August of 2014, where the group committed atrocities against Yezidi Kurds, killing hundreds of people and taking thousands of women as sex slaves.

Shingal was liberated by the Kurdish Peshmerga forces on November 13, 2015, after fierce battles against the extremist group. However, ISIS still holds nearly three thousand Yezidi women who have been distributed to the militants as sex slaves.