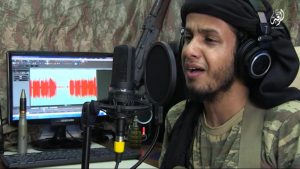 The source told Alsumaria News that a cameraman working for Amaq News Agency, Islamic State’s media arm, was found beheaded at a country road in al-Riyadh, southwest of the province.

IS members were put in alert to search for the attackers, according to the source.

Al-Riyadh and other neighboring areas in southwest Kirkuk have been under Islamic State control since 2014, when the group emerged to proclaim an Islamic “caliphate” in Iraq and Syria. The group executed dozens of civilians and security members there, forcing thousands to flee homes.

Local tribal leaders and politicians from Kirkuk have mounted pressure on the Iraqi government to hasten with invading Hawija, suggesting that its people were experiencing a humanitarian crisis under the group’s rule. The Iraqi government is currently employing the largest portion of its military effort in Mosul, IS’s capital in Iraq where the group is reportedly cornered in a few square kilometers.

Several anonymous attacks against IS members have been reported over the past months since Iraqi forces, backed by a U.S.-led coalition, launched a campaign to retake areas occupied by IS militants.