You are here: Home / Europe / ISIS may send female jihadists to Europe to attack Christian sites 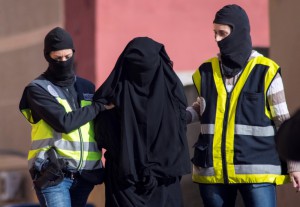 The Islamic State may send members of its feared all-female police force to spread the jihadist group’s terror in religious sites in Europe, with one security expert cautioning against the women’s possible disguise as tourists to easily slip through authorities.

The Al-Khansaa Brigade could attack Christian religious sites in the continent, particularly “Christian symbols,” warned Al-Masri, president of the Centre for Strategy, Military and Security Studies in Syria.

“This is the first time women will be used in these operations. It will be a surprise for the European authorities who look for men,” said Al-Masri, who declined to name his sources in an ISIS-controlled territory in Syria for their safety.

“We don’t think the women will be wearing a hijab or burka – so they do not stand out. They will be normal like everybody, as if they are tourists,” he said.

The extremist group is set to send at least 10 members of the Al-Khansaa, who are notorious for policing women in the Islamic State, Al-Masri warned.

Al-Khansaa members patrol the streets of the ISIS capital armed with AK47s. They have gained notoriety for ruthlessly beating fellow women who do not conform to religious edicts, and even for pushing some women into becoming sex slaves.

Two women who used to be members of the brigade and have escaped to Turkey revealed how the Al-Khansaa worked. The two said they and other foreign women, who travelled to ISIS-controlled Raqqa to join ISIS and marry its fighters and became members of Al-Khansaa made sure women are fully covered when in public, that they do not wear heels, and are escorted by a man. Wearing heels or not wearing the proper Islamic dress called the abaya is punishable by 40 lashes while those who try to flee receive 60 lashes, they told the Independent.

As many as 60 British women are thought to be part of the brigade, receiving a monthly payment of around 100 pounds each.

“Women are not as difficult as men to sneak into countries and there are many European women in the Al-Khansaa Brigade – like French and British – which makes it easier for them to get in undetected,” said Al-Masri.

Among the British women who have flown to ISIS territory and have joined the feared female brigade is Aqsa Mahmood from Glasgow, who is believed to have gotten a senior post in the ISIS ranks.

The three Bethnal Green schoolgirls who fled their families and joined the jihadists are also thought to have joined the brigade. Two of the three have married ISIS fighters.

Al-Masri believes that the ISIS may be plotting to create conflict between Christians and Muslims in Europe.

“The next operations for ISIS in Europe will be against Christians… In the Middle East, it’s mainly between Sunni against Shi’ite Muslims, but now ISIS wants to create a conflict between Christians and Muslims.”

“That means ISIS will try and attack Christian symbols in Europe – like the Vatican for example.”

One security analyst, Raffaello Pantucci from counter-terrorism think-tank RUSI, said the claims are “far-fetched” as security is very high in Europe because of recent terror attacks like the one in Tunisia. Moreover, he said there is no evidence that a male-dominated group will send an all-female group to do its bidding.

“These women would have the same difficulties as anyone else trying to launch an attack,” he said. “Who would you send? You would have to send someone you know had not been noticed by security services before—because they know women as well as men are traveling so they’re watching out for both.”

“You would have to sneak past a very high level of security and in some countries that might be doable but if you try and get into a country like the UK, it would be incredibly difficult.”

“Why would such a chauvinist society send women back to carry out attacks? There is no evidence of them using women before, so there’s no reason for them to start now.”