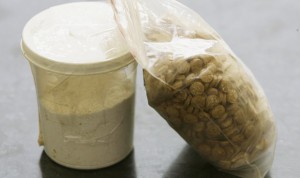 Islamic State of Iraq and Syria (ISIS) is making millions of dollars by selling a banned drug, that makes fighters feel ‘ fearless‘, to different parts of the Middle East, according to the United Nations.

According to the Daily Star, the amphetamine, known as Captagon, has been available since the 1960s and was used to treat attention deficit disorder.

The drug masks feelings of pain, fear and hunger, while keeping fatigue at bay.

The Paris attackers were thought to have taken Captagon before savagely killing 130 people in November.

It was put on a list of controlled substances by the World Health Organisation in 1986.

The UN office on drugs and crime (UNDOC) said former fighters have given evidence to suggest Captagon is used by all sides of the Syrian conflict.

Countries bordering Syria have seized millions of Captagon pills, worth hundreds of millions of pounds in 2015 alone.