You are here: Home / MidEastGulf / ISIS loses more ground in Raqqa, Kurdish-led forces announce liberation of 50% of the city 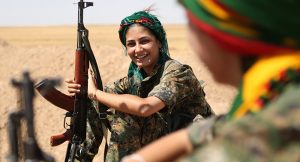 The Kurdish-led Syrian Democratic Forces (SDF) confirmed on Thursday the liberation of half of Raqqa city, adding that the military operations against ISIS extremists will continue until the entire city is liberated, like reported by aranews.net.

Jihan Sheikh Ahmad, spokeswoman for the SDF-led Euphrates Wrath Operation in Raqqa, said in a statement that their forces have seized control of 50% of Raqqa city so far.

Meanwhile, a senior US-led coalition’s official said on Thursday that the SDF has taken control of 45% of Raqqa.

“Today marks day 53 of operations to defeat ISIS in Raqqa.  About 45 percent of the city is under control of the Syrian Democratic Forces.  The SDF have cleared about nine square miles of terrain this past week as they fought against stiff, sporadic resistance from ISIS entrenched in the city,” said Colonel Ryan Dillon, Combined Joint Task Force-Operation Inherent Resolve Spokesman.

“On the western axis, the SDF took control of a series of multi-story buildings that allowed them to provide over-watch and push further into the city’s center,” he added.

“On the eastern axis, the SDF made incremental gains south of the main road that runs east to west in the city,” Col. Dillon said.

“Currently, the distance between the east and west SDF axes is less than a half a mile.  And once they link up, the SDF will have full control of southern Raqqa.  And south of the Euphrates River, the SDF continue to isolate Raqqa and reinforce their positions,” he concluded.

“I would also take account the — how quickly that the Syrian Democratic Forces were able to make it immediately into the city, but there have been some stiff resistance since making it to, like, the ancient wall area as we’ve gotten closer into the city center,” he added.

This comes after the SDF launched a major operation to liberate the city of Raqqa from ISIS radicals.

Raqqa has been known as a de facto capital for the ISIS self-proclaimed Caliphate since the summer of 2014.

On June 6, the Syrian Democratic Forces announced the official start of the battle for Raqqa city.