You are here: Home / MidEastGulf / ISIS leaders flee Raqqa, leave behind fighters to die like ‘sheep’ 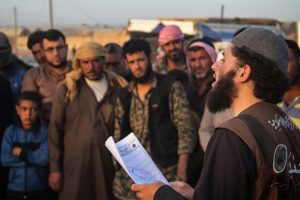 ISIS leaders used spies to root out suspected enemies in their ranks in the countdown to this month’s US-led attack on their de-facto capital Raqqa, the wives of three Tunisian fighters who fled the Syrian town said, like reported by aawsat.com.

They described how the leaders had fled Raqqa as pressure mounted from the US-backed campaign and separate offensives by Turkey-backed rebels and Russian-backed regime forces. One said ordinary fighters had been left behind to die like “sheep”.

Their accounts also indicate growing dissent within the ultra-hardline group in northern Syria in recent months.
Khadouja al-Humri, one of three women who fled Raqqa around six months ago, said ISIS leaders were worried about an uprising or coup, and the Tunisians were seen as a threat because they had criticized the way the group was run.

“My husband was scared. Towards the end there were around 70 Tunisians on the list of (ISIS) security services, wanted. They wanted to shoot them,” she told Reuters at a camp for displaced people in Ain Issa, a village north of Raqqa.
“You couldn’t speak freely or criticize ISIS, you didn’t know who was listening.”

The women, two Tunisians and one from Lebanon, said they had traveled to join ISIS in the hope of leading the kind of religious lifestyle they had long dreamt of. It did not turn out as they expected.

Some Tunisian jihadists declared the ISIS leadership non-believers, or kuffar, over the extreme way they were running Raqqa, Humri said, adding that inequality between leaders and the rank-and-file fighters had become ever more obvious.

It was not possible to confirm their accounts, although ISIS has posted videos showing the execution of people identified as spies or agents of foreign enemy states.

Humri said she and her husband escaped Raqqa by going south to the town of al-Mayadeen, another ISIS-held area where they hid for a time.

Her husband stole cars from ISIS officials and sold them to amass money to pay a smuggler who later took them across the River Euphrates to areas controlled by the Kurdish YPG. When he got there, the YPG, which is spearheading the US-led assault to drive ISIS out of Raqqa, detained him. Humri was questioned but not detained.

“We explained that they we were fleeing ISIS. They treat us well,” she said, sitting with the other two in a sparsely furnished building where foreigners are being accommodated at Ain Issa. “I just want to get out of this camp.”

The women followed similar paths, journeying to Syria via Turkey to follow husbands who had gone to fight in the multi-sided war. Two of them – Humri and Nour al-Huda, a 20-year-old mother of two from Tripoli in Lebanon – said their first husbands had been killed in battle.

They met for the first time at an ISIS-run “guest house” in Raqqa for widows where they were kept under lock and key.

The guest house was overcrowded, each room accommodating 12 women and their children, and Huda said ISIS fighters would choose wives from there based on descriptions provided by a female official in the organization.

ISIS leaders would pay the “emir” who ran the guest house to secure their choice of bride, either in cash or a weapon such as a pistol, she said. German-made Glocks were particularly sought-after. The title “emir” is assigned to senior ISIS officials.

Huda said the Tunisian who married her had wanted to care for orphans. Wounded in both hands, he had not fought for some time. “He was very good with my children, treated me very well. But they didn’t treat him fairly, didn’t give him money,” she said.

It was the “emirs” who had the pick of the women, who lived in the best houses and who wore the fanciest clothes, she said, adding that the ISIS governor of Raqqa was known for giving his relatives well-paid positions in the administration.

“Frankly, we have a lot of regret.”

The US-led coalition battling to drive ISIS from Raqqa has estimated 3,000 to 4,000 of its fighters are holed up there, even after its leaders abandoned the town for more secure areas. U.S. intelligence officials say the ISIS leadership has rebased at al-Mayadeen in southeastern Syria.

Jalal al-Ayyaf, the official in charge of the camp sheltering some 7,000 people at Ain Issa, said some 15 to 20 foreign families had arrived so far, including Russians, Tunisians, Lebanese and Indonesians.

More were expected at the camp, which is run by a civilian council backed by the Syrian Democratic Forces (SDF), the military force waging the Raqqa campaign on the ground.

He said the authorities were taking care of their needs and would help them leave to wherever they wanted. The women said they were not detained but awaiting arrangements to return home.

“We want someone to help us get out,” Huda said.