You are here: Home / MidEastGulf / ISIS leader urges Muslims to ‘move to caliphate’ 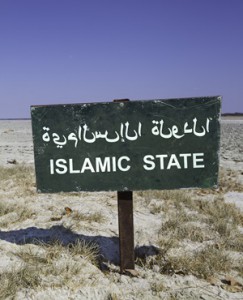 The leader of the Islamic State group Abu Bakr al-Baghdadi on Thursday urged Muslims to emigrate to his self-proclaimed “caliphate”, in the jihadist supremo’s first audio recording in six months.

“And we call upon every Muslim in every place to perform hijrah [emigration] to the Islamic State or fight in his land wherever that may be,” he said.

The voice reading the half-hour speech appeared to match previous audio recordings of Baghdadi, the latest of which was released in mid-November.

As did his previous speech, the audio tape recording released on Thursday comes a few days after media reports that he might have been seriously wounded in a strike by the US-led coalition bombing ISIS in Iraq and Syria.

There was no way for AFP to immediately authenticate the latest recording nor date it but Baghdadi speaks of developments in Yemen, where Saudi-led forces launched an air campaign against Shiite rebels in late March, that suggest it is recent.

Echoing his previous exhortations, Baghdadi said moving to the caliphate he declared over parts of Iraq and Syria in June 2014 or waging jihad (holy war) at home was an obligation for Muslims.

“Has the time not come for you to know that there is no might nor honour nor safety nor rights for you except in the shade of the Caliphate?” he said in the speech, transcripts of which were released in five languages.

He criticised Sunni civilians fleeing fighting in the western province of Anbar to seek shelter in Baghdad and other government-controlled areas.

“So return to your lands, and remain in your homes, and seek shelter – after first seeking shelter with Allah – with your people in the Islamic State, for you will find therein, by Allah’s permission, a warm embrace and a safe refuge,” he said.

Baghdadi lashed out at Saudi Arabia’s rulers, accusing them of launching their air campaign against the Shiite Huthi rebels in Yemen only to please the West.

“Their war is nothing but an attempt to prove themselves once again to their masters from amongst the Jews and Crusaders,” he said.

“It is nothing but a desperate attempt to turn the Muslims away from the Islamic State.”

He also warned that ISIS would carry out more prison breaks, which have become one of the group’s trademarks.

“I will not forget to mention the captives in the prisons of the apostate tyrants everywhere,” the ISIS leader said.

“We will not hold back any strength or spare any effort or miss any opportunity, until we free the last one of you, with Allah’s permission,” he said.

More than 40 inmates, including ISIS militants, escaped in a prison break which ISIS claimed last week in the Iraqi town of Khalis.

The group, which already controlled parts of Syria, swept across the Sunni heartland of Iraq last year before proclaiming a “caliphate” and drawing record numbers of foreign fighters.

A US-led air campaign launched in August helped the central government in Baghdad and the autonomous Kurds in the north to turn the tide on ISIS.

The jihadists have since lost significant ground but still hold the vast province of Anbar and Mosul, the country’s second city where Baghdadi was last seen in public in July.

The ISIS leader said in his speech he thought anti-IS forces would attack the group’s strongholds in Syria before Mosul.

“We believe that their mobilisation will be for Raqa and Aleppo before Mosul. So be cautious,” he said.

Baghdadi praised the fighters in Anbar, who have largely held their ground despite coalition strikes and government-led ground operations.

In some parts of the province, ISIS fighters have continued to advance and Baghdadi egged them on to push towards Baghdad and the holy Shiite city of Karbala.