You are here: Home / Senza categoria / ISIS leader in shortlist for Time Magazine’s 2015 ‘Person for the Year’ 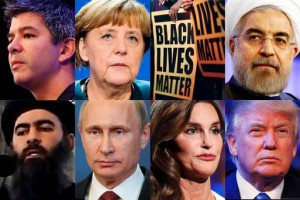 Time Magazine has announced its 2015 Person of the Year shortlist and raising a few eyebrows is the inclusion of Islamic State leader Abu Bakr Al-Baghdadi, who is praised for “inspiring his followers” for staging attacks against Tunisia and France.

Time Magazine has announced its 2015 Person of the Year shortlist and raising a few eyebrows is the inclusion of Islamic State leader Abu Bakr Al-Baghdadi, who is praised for “inspiring his followers” for staging attacks against Tunisia and France.

The publication has defended its decision to include the terror leader among the eight final candidates on the grounds that “for better or for worse… the title [is given] to who has done the most to influence events of the year”.

Time wrote of the ISIS leader: “[He] has inspired followers to both fight in his self-declared caliphate of Iraq and Syria, and also stage attacks in countries like Tunisia and France”.

Also given the nod for 2015 is Republican presidential nominee  hopeful Donald Trump, who Time said deserve his place on the shortlist because of “stirring up the debate about the future” of the Republican party.

“His populist rhetoric has made him the frontrunner in the race for the Republican presidential candidacy and stirred debate about the party’s future.”

Democratic presidential candidate Bernie Sanders won the online readers’ poll for TIME Person of the Year but is not included in the shortlist.

The Vermont Senator won with a little more than 10 pc of the vote when the poll closed Sunday at midnight.

The final ‘Person of the Year’ list also includes ‘Black Lives Matter’ activists, who have protested inequality towards African Americans, especially in their treatment by law enforcement, and a number of global leaders including German chancellor Angela Merkel, Iran president Hassan Rouhani and Russian president Vladimir Putin, who Time said had “defied Western sanctions over his country’s military activity in Ukraine to play a critical but precarious role in the war on ISIS”.

Writing about Mr Rouhani, the magazine said he had sought to bring his country “out of pariah status and repair its sanctions-crippled economy by pursuing a nuclear deal with the West”.

Time’s editors will have the final say on who gets the front page splash for 2015 later next week.