Teenager Diane Kruger has escaped the war-torn region and al-Baghdadi has reportedly sent trusted troops to bring her back, reports Iraqi media- 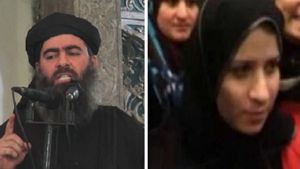 The German wife of ISIS leader Abu Bakr al-Baghdadi has fled Iraq with two other women, it has been reported.

Teenager Diane Kruger has escaped the war-torn region and al-Baghdadi has reportedly sent trusted troops to bring her back, reports Iraqi media.

It is not known why she fled. ISIS has recently lost vast swathes of territory in Iraq to Kurd and Iraqi government forces.

The ISIS leader married Kruger in October 2015 in the province of Ninawa, reports the Jerusalem Post .

She served as the head of Al-Khansa, a special brigade set up to enforce the terror group’s strict Islamic views.

Iraqi media also reported that Baghdadi’s wife was in charge of a special military camp in Kirkuk set up to train women to carry out suicide bomb operations.

The Iraqi-born terror thug “owned” Mueller during her captivity.

Mueller was raped repeatedly by al-Baghdadi and forced to ‘marry’ him while in captivity in Syria.

Mueller, of Prescott, Arizona, went to Turkey in December 2012 to work for a Turkish organization providing humanitarian aid to Syrian refugees along the Syrian border.

She was seized in August 2013 while leaving a hospital in Aleppo in northern Syria.