You are here: Home / Senza categoria / ISIS launch their own TV channel complete with its own weather reports 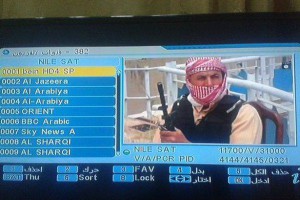 ISIS have launched a satellite TV channel and millions of people around the world may be able to tune in to their vile propaganda.

The Islamic State’s media division, responsible for Islamic State’s sophisticated online brainwashing campaign, has started broadcasting to half a million people in their Iraqi stronghold of Mosul.

As well as propaganda, the station reportedly has airstrike reports, harsh punishments meted out by the savage regime, lectures on their twisted version of Islam and even weather reports.

A group of Syrian citizen activists known as Raqqa is Being Slaughtered Silently said the station, called Bein HD4, is available on Egyptian broadcast provider Nilesat. It is not known if the broadcaster, which is available throughout the Middle East, knows about the station.

Earlier this month ISIS released a bizarre infographic warning its supporters not to watch satellite TV, it has been reported.

The picture, which appears to have been released by ISIS’ propaganda arm, lists reasons for militants to not watch satellite TV – which they claim is full of propaganda.

“Insulting Allah and making fun of His religion and His allies via television series and vile dramas, which lead to people to develop a taste for such things,” it reads.

Another weird justification in ‘The Enemy Within’ is that satellite TV “propogates sorcery, charlatanism, and rationalist philosophies that poison the minds with ideas of atheism and boldness against Allah.”

It also says the TV channels try and divide Muslims and “defame their reputation”.

In December it was reported that Islamic State banned televisions in areas under its control to stop people watching foreign channels.