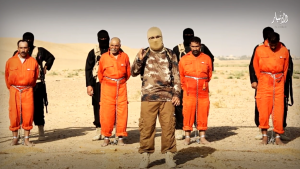 ISIS members in Iraq released a sickening video on Monday showing four men being burned alive while hanging from their wrists and feet, their backs facing the ground. The gruesome display serves as yet another illustration of the group’s extreme brutality and persistent distribution of violent propaganda.

This time, the four victims were Shiite militiamen, according to the video released by ISIS’ official media wing in Iraq’s Anbar Province. They allegedly belonged to the “Popular Mobilization Units,” Shiite militia groups that are allied with Iraqi armed forces.

ISIS said the brutal executions were carried out as revenge for cases in which Shiite militiamen killed or abused ISIS members, such a case in May, when Shiite fighters burned ISIS members alive. The terror group has already broken its own records of cruelty, exhibiting horrific scenes including the death of Jordanian pilot Muath al-Kaseasbeh, burned alive earlier this year. In June, the group released a video showing five men drowning inside a black cage as its lowered into water.