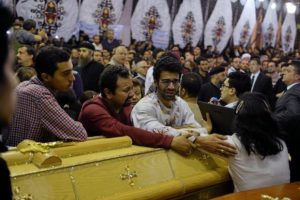 ISIS militants shot dead an Egyptian Christian in North Sinai, local sources and parliamentary deputies said on Sunday – the first attack of its kind after a collective migration of the city’s Christians two months ago, like reported by aawsat.com .

The incident killed hopes of dozens of Christian households to soon return to their homes, especially after ISIS threatened to target them.

However, sources told Asharq Al-Awsat that “the scene in Sinai should not be restricted to violence against Christians,” revealing that there are 30,000 citizens who were displaced from Sinai due to worsening security conditions.

The Egyptian army – in cooperation with the police – has been involved in a fierce war against ISIS and pro-groups in North Sinai since years.

The incident took place on Saturday in the city of El-Arish, one day after ISIS warned to escalate its attacks against Christians. Security sources reported that armed individuals shot dead a Christian citizen called Nabil Saber, who departed from El-Arish in February and settled with his family in Port Said but then decided to return to the city to check on his house and store.

Nabil, 40, returned to El-Arish one week ago to check if he can reopen his store and return to work. Yet, he was surprised by militants attacking his store and shooting him dead.

Hussam Rifai, a parliament member representing El-Arish, said that the security condition in the majority of North Sinai is unstable and unsafe for the return of migrants in the current time. He added to Asharq Al-Awsat: “The state is working hard to impose its control over the region. The confrontations are causing huge losses among the group members who then resort to ignoble operations such as intimidating citizens.”

Egypt has recently witnessed a number of terrorist operations against Christians – the last one was the bursts in two churches that killed around 50 in April and pushed the Egyptian authorities to declare the emergency state for three months.