You are here: Home / MidEastGulf / Isis jihadis blamed for suicide bombings that killed more than 120 in Turkey 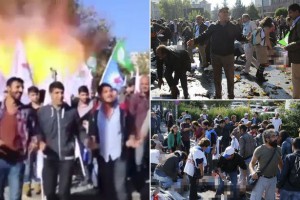 Islamic State extremists have been blamed for suicide bombings that killed more than 120 in Turkey.

The nation began three days of mourning yesterday for the victims of two blasts at a peace rally in Ankara.

It’s thought more than 128 people were killed and at least 250 were injured in the deadliest terror attack in Turkey’s history.

A source said the attack had striking similarities to a suicide bombing in July in Suruc near the Syrian border. They added: “All signs indicate the attack may have been carried out by Isis.”

Saturday’s bombings, which came seconds apart, happened at a protest against escalating violence between Turkish forces and Kurdish militants in the south-east of the country.

A group of about 70 mourners were eventually allowed to visit the scene.

Funerals of some of the victims took place yesterday, including Korkmaz Tedik, of the Turkish Labour Party.

The Queen has sent a letter to the Turkish president Recep Tayyip Erdogan saying she was “shocked and saddened”.

She wrote: “My thoughts are with all those affected by these terrible events.”

Turkey recently opened its bases to US aircraft launching air strikes on Isis in Syria and the country has also carried out strikes on the extremists. (Dailyrecord)