You are here: Home / MidEastGulf / ISIS is manufacturing arms on industrial scale 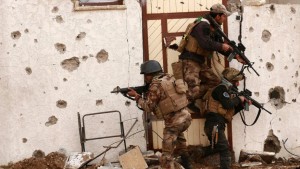 The Islamic State group was manufacturing weapons in and around Mosul on an industrial scale with products largely purchased in bulk from Turkey, according to a report published by an arms research group Wednesday.

The findings show that IS maintained a “robust and reliable” supply chain between Turkey and Iraq that allowed the fighters to produce tens of thousands of weapons, the London-based Conflict Armaments Research said. The group’s researchers studied IS weapons found at manufacturing facilities and on the battlefield during the Iraqi operation to retake Mosul that is underway.

As Iraqi forces advance, the extremists are losing the physical capacity to manufacture weapons on an industrial scale, but the research group’s executive director James Bevan warned that highly trained fighters will take their expertise with them as they retreat.

“Given that this group is so organized, they clearly see the writing on the wall in Mosul,” Bevan told The Associated Press, saying he believes IS has already moved its highest trained bomb-makers out of Mosul and into Syria and southern Turkey.

“They place a very high value on technical capacity and they will do everything they can to preserve it,” he said. Bevan added that IS fighters likely looked to Turkey to purchase weapons ingredients, knowing that their demand would outstrip what is available in Iraq.

Iraqi forces have been met with stiff resistance in Mosul, including waves of suicide car bombs, since launching an offensive to retake the city in October. They have retaken less than a quarter of the city since the operation began.