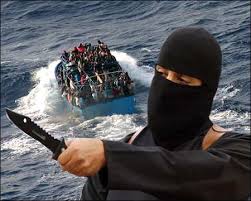 The ongoing Syrian refugee crisis has renewed concerns Islamic State group fighters could be slipping into Europe amid the greatest wave of refugees to the continent in decades. Right-wing British politician Nigel Farage warned last week there was cause for “very genuine fear” of extremists making their way into the EU, and called on citizens not to “allow compassion to imperil our safety,” the Telegraph reported.

But borders into Europe have always been porous, and refugees from Syria and elsewhere fleeing political turmoil have for years made their way to the continent en masse. While border control and officials will need to figure out how to amplify security, experts said there was little reason for heightened concern even as the influx of refugees continued to grow and warned against allowing anti-immigrant politicians to exploit the refugee crisis for political gain.

“It’s a concern that people at borders are always going to have to be vigilant about and at the same time grapple with,” said Sean Kay, a professor of international relations at Ohio Wesleyan University. “But I’m not sure I would want to tag the refugee crises with that problem. … To the degree people are using a humanitarian crisis to make political points that would certainly be unfortunate.”

Hundreds of thousands of refugees fleeing war in Syria have chosen in recent months to travel to Europe in hope of finding safety and a better life. War in Syria, which has displaced some 11 million people, has sent more than 360,000 refugees fleeing across the Mediterranean Sea to Europe this year, the United Nations’ refugee agency has estimated. Among the refugees have been migrants from African and other Middle Eastern and Central Asian countries. A picture published last week of Syrian toddler Aylan Kurdi, whose body washed ashore near a Turkish beach resort after he drowned during a dangerous boat journey in an inflatable dinghy, raised awareness of the refugees’ plight.

Several eastern European nations, particularly Austria and Hungary, have sought to prevent refugees from entering their borders while German leaders have said they would be willing to welcome 500,000 refugees a year.

The surge of refugees in recent months has left European authorities struggling to take control of the security situation, prompting fear extremists could slip into Europe under the radar. An ISIS operative told BuzzFeed in January the militant group already had sent some 4,000 fighters into Europe, who were waiting quietly to stage attacks. Smugglers reportedly confirmed the ISIS operative’s assertion, and admitted to smuggling militants across waters in the very same boats used by hundreds of thousands of refugees.

“It’s a real threat for sure,” said Tom Sanderson, director of transnational threats at the Center for Strategic and International Studies in Washington. “If you have a sudden increase of migrants going in, well [ISIS is] not stupid, they’ll go with the flow.”

ISIS has repeatedly threatened to stage attacks against the West. In January, the extremist group reportedly formed the “Anwar al-Awlaki Battalion,” a unit of English-speaking foreign fighters, with the purpose of carrying out attacks on English speaking countries, the anti-ISIS activist group Raqqa Is Being Slaughtered Silently said. Awlaki, after whom the battalion was named, was a mainstream and popular American Muslim preacher turned al Qaeda leader and recruiter, who was killed by a U.S. drone strike in Yemen in 2011.

The most pronounced threat earlier this year seemed to stem from homegrown extremists — sympathizers with ISIS already living in Europe, including some who traveled to Syria and returned home. Some 20,000 foreign fighters reportedly have joined Sunni militant organizations, including ISIS, about a fifth of whom were believed to be from Europe, the International Center for the Study of Radicalization and Political Violence reported in January. Belgium became the first country in the EU to experience an attack by a fighter who had returned from Syria when Mehdi Nemmouche, a French citizen, opened fire in May 2014 and killed four people at a Jewish museum in Brussels.

Whether the refugee influx could prompt a shift in security focus from homegrown extremists to foreign fighters who have slipped into Europe is not yet clear. Sanderson suggested European countries step up their screening of refugees and try and poke holes in their backstories to weed out extremists. Currently, only Germany has announced plans to begin processing all refugees seeking asylum in its territory, and authorities across Europe are overwhelmed by the sheer numbers of people entering their borders. In Greece, the gateway for many refugees into Europe, processing centers are backlogged, leaving refugees waiting hours.

Experts said while the risk might rise with a greater influx of refugees, it was critical not to allow fear to influence wider policy. “It’s an issue of real concern, but it shouldn’t be blown out of proportion. It should just raise the awareness of those concerned with infiltration, and should not stop the flow of refugees — a vast majority of whom are legitimate seekers of asylum or safety,” Sanderson said.