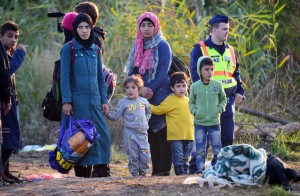 Paris counter-terrorism authorities discovered a car September 4, with three bottles of diesel fuel and five canisters of cooking gas rigged to explode near the iconic Notre Dame Cathedral. Paris police now believe that nearly all the terror plotters involved with the rigged car were women who were run by “remote control” by a notorious ISIS terrorist in Syria.

The women put up a fierce fight when arrested by French police Thursday. One woman was shot in the leg when she tried to stab her arresting officer and another stabbed a plain-clothes French officer with a kitchen knife by leaning out the window of her car. The third woman arrested reportedly recruited her 16-year-old daughter for the plot, who was later detained in another Paris suburb.

“The terrorist organization uses not only women, but young women, who get to know each other and develop their plot from a distance,” Paris Prosecutor François Molins told reporters.