You are here: Home / MidEastGulf / Isis in Syria: Islamic State and other rebels now control most of the country 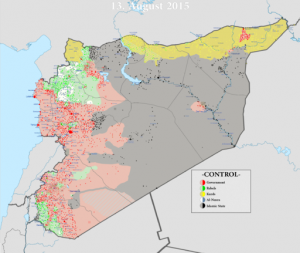 Islamic State (Isis) militants and other rebel groups now control five-sixths of Syria, with Syrian president Bashar al-Assad left controlling an area the size of Belgium, according to a military intelligence report. The area Syria under the control of government forces has shrunk by a further 18% to 11,500 square miles (29,800 sq km) since January of this year.

In July, Assad said that the Syrian Army had to relinquish control of some areas of the country because of a lack of soldiers.

Analysts from IHS Jane’s Information Group say the regime is focusing on shoring up its defence of the capital city Damascus and a strip of territory along the Mediterranean coast. The strategy is to defend the ancestral home of Assad’s family and of the Alawite sect of Shi’ite Islam from which his support base is drawn, the Times reported.

“The key areas which Assad cannot afford to lose include Damascus, the Alawite coastal provinces of Latakia and Tartous, and the city of Homs,” senior Middle East analyst of IHS Jane’s Information Group Columb Strack told the Times. “These cities are likely to be defended, even at the expense of other cities like Aleppo or Daraa.”

Rebel fighters – which include IS militants – have made significant gains in recent times. The Jaish al-Fatah rebel group, which is backed by Turkey, Saudi Arabia and Qatar, having gained ground in the northern province of Idlib. Meanwhile, in the last two weeks, other rebel fighters reached the al-Jibal Sahiliyah Mountains, a range of peaks that run from north to south that offers a natural defence to the coastal plain, the Times reported.

Assad’s forces appear to be weak and depleted despite financial assistance from Russia and Iran, Voice of America reported. The regime’s defensive weakness is at the hinge around the border with Lebanon, and IS has forces on both the east and west sides of the vital link road, according to analysts from Jane’s.

“The bigger picture is that Assad is not going to last much longer,” Strack said.

The four year-old civil war has killed around 250,000 people, mostly civilians. In addition, around 8 million people have been displaced, more than half becoming refugees attempting to enter Europe.