You are here: Home / Africa / Isis in Somalia: The Islamic State’s fight to establish a foothold in East Africa

In 2015, a faction of Somalia-based al-Shabaab terrorists pledged alliance to the Islamic State terror group 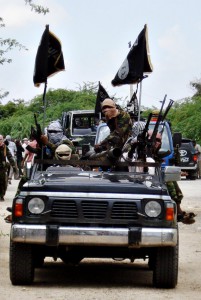 Yesterday (26 October), Somali militants affiliated to the Islamic State (Isis) terror groupseized the town of Qandala in the autonomous region of Puntland, marking the first time IS has captured territories in East Africa.

IS already controls large swathes of Syria and Iraq and has allies in several African countries, such as Nigeria, Libya and Egypt. The group has been trying to establish a foothold in East Africa.

Somalia-based al-Shabaab terrorists, who pledged alliance with al-Qaeda in 2012, have been increasingly urged by IS to join their struggle. In October 2015, an al-Shabaab commander and recruiter, British citizen Abdul Qadir Mumin,pledged alliance to IS, from his base in the semi-autonomous region of Puntland, north-eastern Somalia.

The announcement was a reflection of tensions within Shabaab and caused a fracture in the group, whose intelligence and security wing, known as Amniyat, has increasingly being arrestingmembers suspected of trying to defect to IS.

A few weeks after the announcement, a bus attack on the Kenya border with Somalia was linked to IS.In April, IS claimed responsibility for an attacktargeting a military vehicle belonging to the African Union (AU) in the outskirts of the capital Mogadishu.

Puntland forces claimed on 27 October that an offensive had already succeeded in driving IS militants out from Qandala.

Furthermore, experts and analysts believe the scale of ex-Shabaab militants now loyal to IS is still small and Shabaab remains predominantly loyal to al-Qaeda.

However, the 2015 Shabaab defection and a link with Nigeria-based Boko Haram terrorists, who now represent the “Islamic State’s West Africa Province (Iswap)”, suggest IS might try to continue its expansion in East Africa.

Earlier this year, Somalia’s President Hassan Sheikh claimed Boko Haram had been training in Somalia for some time. The leader suggested Shabaab and Boko Haram “were linked” and could destabilise the whole horn of Africa “and by and large, the African continent”.

“Capability in arms, militants and logistics will be easily shared between both pro-IS groups,” he told IBTimes UK.

“One must remember that the idea of holding territory was never envisaged by Al-Qaeda as a good strategy. It was IS that took the bold step of holding massive territory in addition to exporting the extreme version of the Salafist ideology,” Otto, who is also a senior adviser for Global Risk International (GRI), continued.

“IS is gaining a stronger foothold in West and East Africa making any thoughts of a decline in radical Salafist jihadism in 2016 in Africa a fairy tale. A more collaborative effort towards a global regional strategy against IS in Africa is imminent.”