You are here: Home / Mediterranean / Isis in Sinai: the “libyan connection” 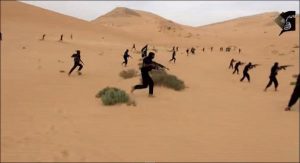 How can the self-styled Sinai Province of Islamic State – which evolved out of another Islamist terrorist organization, Ansar Bait al-Maqdis – hold its own against an Egyptian army that has received massive reinforcements over the past three years? Most commentators think that Egyptian forces are ill equipped to deal with guerrilla warfare in urban and mountainous areas, like reported by jpost.com.

To mark his displeasure with the ouster of president Muhammad Morsi and his Muslim Brotherhood regime, President Obama suspended part of American military assistance to Egypt and refused to help President Abdel Fattah al-Sisi set up special commando units and provide other much-needed equipment. Furthermore, following the fall of the Muslim Brotherhood, all jihadi organizations in Sinai regrouped to form Ansar Bait al-Maqdis.

But for popular daily Al-Masri al-Yom, which devoted its February 2 issue to the problem, ISIS owes its continued success to the ease with which it keeps acquiring superior weapons, morphing “from a small organization with light armament to something close to a regular militia with sophisticated armament and a firepower to be reckoned with.” In the chaos following the Libyan civil war in the years 2011-2013, huge stockpiles of the Libyan Army were up for grabs.

Soon a steady stream was being smuggled by a new jihadi group, Ansar al-Sharia, which appeared in the eastern part of the country even before the killing of Muhammad Gaddafi. Some of its leaders became members of the Interim Transitional National Council that ruled the country, which gave them legitimate access to army depots. It had links with Al-Qaida in the Islamic Maghreb, very active in North Africa and Sahel countries, and some of the weapons found their way there; but the greater part went to Egypt, then in a state of turmoil, and reached terrorist organizations in the Sinai Peninsula and in Gaza.

According to the Egyptian daily, in 2012 the arrival in Sinai of the Russian Kornet, an antitank guided missile, was a game-changer.

Used for the first time against an Egyptian army position near Rafah, it has since made dozens of victims among armed forces and civilians alike and is a powerful deterrent because of its five-kilometer range, its precision and its deadly impact.

It was not the only sophisticated weapon to be smuggled from Libya to ISIS in Sinai. There were also Grad missiles (of the type recently launched at Eilat), anti-tank rocket propelled grenades, air defense Strela missiles, the latest Kalashnikov rifles, the Austrian Steyr sniper rifles, the DShK Russian machine heavy guns and more. All of the above came from Gaddafi’s stockpiles.

In the hands of fanatic organizations, they had a devastating impact.

According to Al-Masri al-Yom, investigations carried out by international institutes monitoring arm deals throughout the world show that the serial numbers of weapons captured by Egyptian forces in Sinai match those of weapons acquired by Gaddafi from the Soviet Union and later from Russia. Other countries such as France, Italy, Great Britain and even North Korea eagerly sold weapons to Gaddafi, but Russia was the main supplier.

Investigative teams sent by the Egyptian daily to Northern Sinai were told by tribal elders and other citizens that in early 2011, as the security situation in the Peninsula was getting worse as the result of the turmoil in Egypt and in Libya, jihadi terrorists appeared carrying advanced weapons never seen previously in the area.

At the same time, jihadists from Gaza and Libya, many of them foreigners, came in to teach local militants to use the new weapons and train them, not only in urban guerrilla but also on fighting in the areas surrounding the towns of Sheikh Zuweid, Rafah and El Arish. In a matter of months, while the Supreme Army Council was ruling Egypt, they were achieving success after success. There was no one to address the threat in a decisive manner: members of the security forces had left the peninsula in droves to return to Cairo, feeling that the chain of command no longer existed.

Terrorists from Ansar Bait al-Maqdis were attacking army checkpoints and patrols; soldiers were confronted by weapons they did not know existed. In 2014 an attempt to storm the strategic police station of El Arish nearly worked and only the extraordinary courage and ingenuity of the officers and policemen averted a disaster.

Morsi’s election did not signal an end to smuggling and attacks.

The new defense minister appointed by the president, one Abdel Fattah al-Sisi, reorganized the army and was poised to launch a campaign in the peninsula to eliminate the terrorists before they could entrench themselves further, but was allegedly prevented to do so by Morsi. By the time that president had been ousted, Ansar Bait al-Maqdis had become far better organized and trained.

Swearing allegiance to Abu Bakr al-Baghdadi and Islamic State brought funding and additional assistance. In July 2015, after Sisi had been elected president, the movement launched an all-out assault on Sheikh Zuweid, where they hoped to set up an Islamic emirate. Security forces won the day after intense fighting; 21 soldiers and policemen and more than a hundred terrorists lost their lives.

As reported by the Egyptian daily, Ansar al-Sharia terrorists, assisted by Libyan officers who “liberated” weapons and ammunitions from military depots, smuggled them across the 1,200-kilometer-long border, sometime even through the El-Saloum official crossing point.

They awaited transit in underground depots along border crossings and in the oases of Siwa and Farafra; these depots were deep enough to store jeeps equipped with machineguns.

Some of the weapons were then diverted toward Upper Egypt – Assiut and Beni Souef and from there to Sinai. But the bulk went through the Western desert trails and little used roads towards the Sinai Peninsula and the Gaza Strip.

Meeting points with local terrorists were arranged through satellite phones. Advance warning was given regarding army checkpoints and seemingly innocent civilian cars were sent ahead of the trucks carrying contraband weapons to warn of random roadblocks so alternative routes could be taken.

The Supreme Army Council, busy trying to rule the country, was not sufficiently aware of what was going on, and Morsi apparently chose not to see for ideological reasons. Sisi, however, grasped the extent of the threat and after seizing power commanded the army to put an end the steady supply of advanced weaponry to ISIS in Sinai.

The task was not easy. The border runs along desert and mountainous areas. Reinforcements were sent but the smugglers fought back, harassing army patrols and positions. In the Farafra oasis, a surprise attack on an army outpost in July 2014 left 27 soldiers dead. In April 2015, Egyptian aircraft mistook a caravan of tourists for smugglers and opened fire, killing 12 Mexican tourists.

However, increased cooperation with the new Libyan National Army led by General Khalifa Haftar led to a tightening of the border, though smuggling went on at a lesser rate.

President Sisi recently announced that enough material had been found to produce 1,000 tons of explosives! On the other side of the border, Libyan forces discovered an underground depot with 70 bags of explosives weighing nearly half a ton; enough, according to a local commander, to destroy 20 two-story buildings in a radius of 4,000 square meters.

The fight is far from over and ISIS in Sinai is still getting a steady supply of choice weapons from Libya, transferring some to Hamas in Gaza in the framework of their cooperation.

According to Al-Masri al-Yom, Libyan officers added that smuggling also goes along the common border of Libya and Egypt with Sudan and that armaments find their way to Islamist terrorist organizations active in Algiers, Tunisia, Niger, Mali and even in Syria.

There is no reliable data concerning the extent of the various types of armament which “disappeared” from Gaddafi’s stockpiles. A spokesman from the Libyan army said it was estimated at 21 million items.

Most of them were smuggled out of the country – mainly to Egypt – or destroyed in the ongoing civil war raging in Libya. This constitutes a strategic disaster of stunning proportions with far-reaching consequences for Egypt and for Israel.

One can only wonder at the incredible lack of foresight of Obama and the European Union – led by France and Great Britain – acting to topple Gaddafi, the lone unifying factor in a country made of a mosaic of tribes.

In the ensuing chaos, tribes set up private militias to further their own agendas.

Though Western powers were well aware of the awesome amounts of weaponry acquired by the Libyan ruler during his long years in power, that fact did not give them pause.

They might have thought twice had they understood that a flood of refugees would descend upon their shores.