You are here: Home / Mediterranean / ISIS in Sinai can expect more funds, and more Egyptian attacks 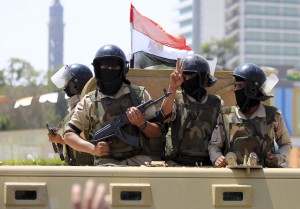 The bombing last month of a Russian passenger jet that has been attributed to ISIS in Sinai will likely result in the group getting funds from ISIS Central, to pay for more smuggled advanced weaponry, which the organization can use to target both Egypt and Israel.

Wilayat Al-Sinai, previously Ansar Beit Al-Makdes, has been buying arms trafficked into Sinai from Libya using them to launch a series of deadly attacks on Egyptian security forces.

Its ability to plant a bomb on board a civilian airliner that took off from Sharm El Sheikh International Airport represents a step up in its terrorist capabilities. The bombing might be rewarded by ISIS Central, in the form of funds sent to Wilayat Al-Sinai to further enhance the group’s capabilities.

Following its bombing attack on the Russian airliner, which murdered 224 civilians, the status of Wilayat Al-Sinai can be expected to rise in the eyes of ISIS Central in Syria and Iraq.

On the flip side of the equation, the organization, mostly made up of local Sinai Beduin members mixed with some foreign volunteers, will now face an even more intense Egyptian military campaign to destroy it.

Egypt has over the past year carried out two major military assaults on ISIS in Sinai. On the ground, Egyptian commando units, armored vehicles, and special operations units have been battling the group, while in the air, Egypt has deployed F-16 fighter jets and Apache assault helicopters to launch air strikes on the organization.

A new assault by Egypt on Wilayat Al-Sinai now seems a matter of time, after the group caused enormous damage to Egyptian tourism and its economy.

ISIS continues to operate, on a far lower scale, in the Gaza Strip as well, with a small ISIS-affiliated group firing a rocket into southern Israel on Sunday night. According to Israeli intelligence assessments, the rocket was fired in the course of an ongoing dispute with Hamas, which salafist jihadis in Gaza have sought to undermine.

A radical jihadi-Salafi group calling itself the Omar Hadid Brigades is behind the rockets. The group is named after a key figure who helped Abu Musab al-Zarqawi set up and run al-Qaida in Iraq nearly a decade ago, planting the seed for the Islamic State in Iraq, which eventually turned into ISIS when it crossed into Syria.

Earlier this week, Defense Minister Moshe Ya’alon said that “Hamas is not happy about rocket and sniper fire from Gaza. It is working to stop this,” Ya’alon said.

On the other hand, Hamas has in the past been willing to cooperate with ISIS in Sinai, allowing it access to Gazan weapons and training when possible, in exchange for access to the Egyptian side of Rafah tunnels.

Egypt has however been highly successful in blocking off  the Gaza-Sinai smuggling tunnels.