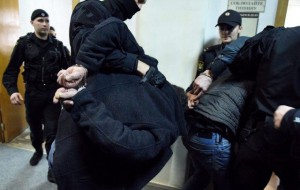 Around 20 Islamic State (Isis) recruiters have been arrested by Russian security services in Moscow. In a dual operation the Federal Security Service and police apprehended the Uzbek nationals on 30 March who were reportedly caught with a haul of fake documents, including false Turkish driving licences.

Security sources claim that the cell was trying to radicalise young marginalised Russians with the aim of getting them to join Daesh (Isis) before arranging to send them to Syria or Iraq. It is the latest crackdown by Russian authorities who arrested seven suspected Isis terrorists accused of planning attacks on the capital and St Petersburg.

The arrests come on the same day that one police officer was killed and two injured when two cars were blown up in Russia’s southern Dagestan region. Isis said in a statement released by the affiliated al-Amaaq news agency, that the Dagestan branch of the extremist group had killed 10 Russian security personnel and injured three in the IED attack east of Kaspiysk.

A security source told Reuters: “During a joint operation of the FSB (Federal Security Service) and the police, around twenty people suspected of connections to ISIS were arrested. According to preliminary information, they were searching for and recruiting new members in Moscow.”

Russia is faced with an increasing problem with Islamic extremism – according to official figures compiled by AFP, A total of 2,400 people from the Russian Federation have joined the jihadists in the Middle East, the largest number in Europe. Most hail from the volatile Dagestan region and neighbouring Chechnya and many have appeared during the brutal propaganda videos the group is famous for.

In December, Isis claimed responsibility for an attack at the historic Derbent citadel in Dagestan, which left one dead and 11 injured. And in January this year three Russian citizens were detained in connection with an Istanbul bomb blast.

The Kremlin has targeted Isis in its military campaign in support of Syrian President Bashar al-Assad. The associated airstrikes have been successful in driving the terrorists from the ancient city of Palmyra earlier this week.