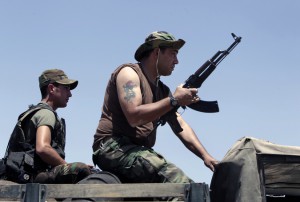 Hezbollah fighters repelled an attack by Islamic State (Isis) jihadists on the Lebanon-Syria border, while the Lebanese army also targeted the extremist group in an attempt to retake full control of the border region.

Hezbollah, which is actively fighting alongside the regime of Bashar al-Assad in Syria, recently launched an offensive against Islamist militants that have infiltrated Lebanon’s mountainous Qalamoun region.

The group’s TV station Al-Manar reported today that IS militants attempted a counteroffensive targeting the Lebanese militant group’s positions near the border town of Ras Baalbek.

The assailants were however pushed back, suffering numerous casualties and losing three vehicles during the clashes, the broadcaster said.

At the same time, the Lebanese army was also taking part in skirmishes in Qalamoun, pounding the Isis with heavy artillery and rocket launchers around Ras Baalbek and the nearby town of Arsal, state-owned news agency NNA reported. Other local media said army helicopters were also involved in the operation.

Aaron Balshan, an intelligence analyst with the Levantine Group, said the army hand was forced by Hezbollah recent gains.

In May, Hassan Nasrallah the leader of the Iranian-supported Shi’ite Islamist group, accused the army of being incapable of defending Lebanon’s notoriously porous eastern border and announced a large offensive against IS and the Nusra Front, al-Qaeda’s Syrian offshoot, in the Qalamoun area.

The group has since seized back more than 300 square km, prompting government forces to intervene not to let the whole region slip into the hands of Hezbollah, which is listed as a terrorist organisation by the US.

The fight has put the army in an awkward position, as it has been trying to steer clear of the Syrian conflict not to appear as baking any side in the increasingly sectarian war, to avid fuelling religious tensions at home, while Hezbollah has been overtly backing the Assad regime.

As a result, on the field in Qalamoun there is a “certain degree of coordination” between Hezbollah and government troops that are fighting a common enemy within a few kilometres of each other, but not all-out cooperation, Balshan said.