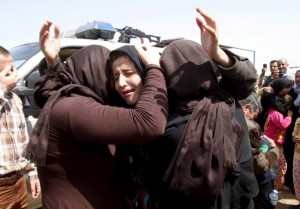 Two Yazidi women who were sold and later kept as sex slaves by Isis fighters have told their stories from a refugee camp in Iraq.

The Daily Mail spoke to the two former sex slaves about their horrific experiences as Isis prisoners and how they escaped.

One of the women, a 19-year-old mother of one, told the newspaper that she let her first militant who “bought her” to rape her “whenever he wanted” to save her one-year-old son from being beaten. The woman, who was identified as “Reehan,” said her young child was the only reason she did not take her own life.

Reehan told the Daily Mail she was abducted from her home in a village north of Sinjar last August. “I was with my husband and my son when 30 cars with [Isis] men drove over near our home,” she told reporters as she held her young son in her arms. She, her family and other Yazidis were driven to the town of Tal Afar, where women and children were separated from the men.

Reehan was initially sold to a 50-year-old Iraqi Turkmen fighter, who kept her captive for 10 months. After he beat her son in front of her, she agreed to let him do anything to her. “I agreed to everything that this man wanted for the sake of my son,” she said.

She was later sold to another fighter in Mosul, Iraq before being sold for a third time to a Libyan fighter in Raqqa, Syria. Reehan told the Daily Mail that she lived in the third home for 20 days along with another 22-year-old and 15-year-old Yazidi women.

Her third captor would go on to rape an elderly mother and sexually molest her 5-year-old daughter, prompting Reehan to escape. A Syrian man, who allowed her to telephone her mother in Dohuk, agreed to smuggle her across the border if she paid him $15,000. Her mother was able to raise the funds. She now lives in the Khanke refugee camp and says her husband, father and two sisters remain captive.

Meanwhile, a second former sex slave, a 25-year-old was repeatedly sold to several cruel jihadis who tied her to a bed and gave her morphine to keep her “silent,” the Daily Mail reported. The woman, named “Barfo,” was severely beaten, limiting her ability to walk for two months.

Similarly to Reehan, Barfo was abducted from her home in Sinjar on 3 August 2014 and taken to the slave auction in Tal Afar. She was sold to a 35-year-old Iraqi Isis fighter, who raped and drugged her, she told the Daily Mail.

“I tried to fight him but I could not because he was too strong [and] he tied me to the bed and he injected me with morphine to make me silent,” she said.

Barfo attempted to commit suicide but her captor stopped her. Three months later, she was taken to Mosul and spent a week in Badush prison, the Daily Mail reported. She was later taken to Raqqa and sold to a 30-year-old Arabic man.

“This man forced me to sleep with him and then he would beat me,” she said. “One time he beat me so badly that I could not walk for two months”.

In Syria, Barfo was sold as a sex slave to four different Isis militants. She later managed to escape when a Syrian neighbour took pity on her and took her and other Yazidi girls to the town of Afrin. She then reunited with her mother and baby brother. Two of her sisters are being held in Mosul and Raqqa.

Yazidi women continue to come forward to describe the horrific ordeals they have been forced to endure under Isis captivity.