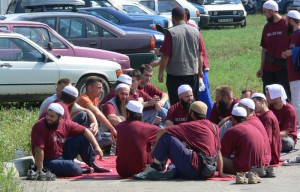 Groups of suspected Islamist radicals have been buying land in the Eastern European nation of Bosnia and Herzegovina, Sputnik International reported Thursday. This phenomenon has been going on for at least two years, and news of the recent acquisitions in a report in Italian newspaper Corriere della Sera came as fears of Islamic terrorism in Europe were reaching all-time highs.

“The convenient location gives the Islamists a good opportunity to enter the Schengen zone. Moreover, there are still large stocks of arms and ammunition in the region left after the war in former Yugoslavia, which could be used by Islamists in their terrorist attacks,” read a report in German newspaper Deutsche Wirtschafts Nachrichten, cited by Sputnik.

The groups bought land in the northern region of Bosnia, a few miles from the border with Croatia. While Croatia is not part of the Schengen area — a 26-country zone of the European Union in which people can travel without visa or border checks — it is an easy crossing point into other Schengen countries, such as Hungary and Slovakia. The Salafi community in this region has denied it has connections to Islamic terror groups in Syria.

Bosnia has become an important point of recruitment for terrorist organizations such as the Islamic State group, which is based in Iraq and Syria. Nearly 40 percent of the nation is Muslim, and Bosnian national Husein Bosnic has become a top recruiter for the group in Europe, helping send more than 300 foreign fighters to Syria, France 24 reported.

Fears of attacks in Europe have grown since Islamic militants carried out a spate of massacres in Paris, Nov. 13, 2015. At least eight terrorists who had pledged allegiance to ISIS descended upon café s, bars, a concert hall and a stadium, slaughtering 130 people in the worst attack on French soil since World War II. All of the attackers were French or Belgian nationals, sparking concerns over how to detect and prevent Islamic terrorists from traveling within the visa-free Schengen region.