You are here: Home / West Asia / ISIS in Afghanistan nothing but a movement formed by Pakistani militants 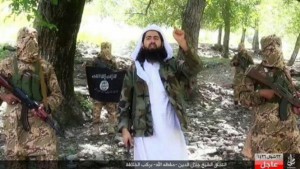 Despite a slowdown in the activities of the affiliates of Islamic State of Iraq and Syria (ISIS) terrorist group in Afghanistan, a newly-recorded audio has emerged online claiming to belong to a commander of the group’s Khurasan province.

The speaker who has been identified as Sheikh Jalaluddin claims he is a commander of the Islamic State Wilayat Khurasan (Khurasan province).

Sheikh Jalaluddin claims that the group started war against the US, Europe, Afghan and Pakistani governments and said the ISIS affiliates were not the ones who started clash with the Taliban group in Afghanistan.

Giving the examples of inter-Muslims fighting in the 7th century, Sheikh Jalaluddin claimed that the group has basis to fight against the Taliban militants, calling them puppets of Pakistan’s military intelligence – Inter Services Intelligence (ISI) and apostate of Iran.

In parts of his provocative speech Sheikh Jalaluddin called on Sunni Muslims to stand against the Shia Iran, accusing it of supporting certain Taliban elements to eliminate the ISIS affiliates.

Although, the authenticity of the audio could not be ascertained, what makes it interesting is the accent of the speaker who use the same accent widely used in tribal regions of Pakistan and in the areas where Pashtu is mostly spoken.

Using the words such “Soch” meaning think in Urdu and “hospital” a term widely used in Urdu language and numerous others terms, further supports the statement by the Taliban that mostly Pakistani nationals are fighting for the ISIS terror group in Afghanistan.

“People under the name of Daesh are currently only operating in one or two districts of Nangarhar who are mostly Pakistani nationals with a very small number of young locals,” Taliban spokesman Zabiullah Mujaihid said.

He also ruled out that the Islamic Movement of Uzbekistan (IMU) terrorist group is based in Afghanistan, insisting that the militant groups are fighting under the flag and policy of Taliban in Afghanistan.

The remarks by Mujahid comes amid growing concerns that the ISIS affiliates are looking to gain foothold in Afghanistan.

Although, the ISIS affiliates received major blows following a series of deadly drone strikes in eastern Nangarhar province during the recent months, incurring casualties to the group’s top leaders.

However, there are concerns regarding the activities of the brutal Islamic Movement of Uzbekistan (IMU) terrorist group in the country, particularly in northern parts of Afghanistan.

The Islamic Movement of Uzbekistan (IMU) declared as a terrorist organization by the United States declared it is now part of the Islamic State of Iraq and Syria (ISIS) terrorist group.

The group recently released a video which purportedly shows the group’s leader Usmon Ghazi and his fighters taking oath of allegiance to ISIS terror group and its leader Abu Bakr al-Baghdadi.

The allegiance by IMU to ISIS terrorist group was followed almost two weeks after the death of the Taliban supreme leader Mullah Mohammad Omar was confirmed.

IMU issued a statement earlier this month demanding clarification from the Taliban regarding Mullah Omar’s death while accusing the group lying his death.