You are here: Home / Senza categoria / ISIS have ‘secret army of 500 children’ in military camps in Syria 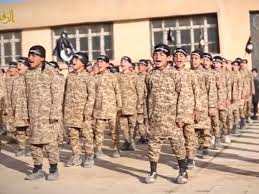 ISIS has an army of 500 children in military camps throughout Syria, it has been reported.

The horrifying claim comes from Ayoub Khan, the head of the Anti-Terrorism Department of Malaysia’s intelligence organisation.

He told Moscow-funded RT the children, some of them from Southeast Asia, are brainwashed in Islamic State’s corruption of Islam and receive training in using firearms and hand-to-hand combat.

In May, a Kurdish official disclosed that the the terror group set up special military barracks in Syria to train the children of abducted Yazidis, an ethnic minority within Syria and Iraq.

“In addition to providing military training to the children aged above five, the ISIL (another name for ISIS) also brainwashes them for future use,” an official of the Iraqi Kurdistan region said.

He reiterated that more than 100 Yazidi children are undergoing military training in Raqqa, the group’s ‘capital’ in northeastern Syria.

ISIS kidnapped more than 4,500 Yazidis in August 2014. Many more were massacred and thousands fled their homes and headed to the Kurdistan Region.

The news shows just how desperate the terror group is to radicalise the next generation of jihadists.

Leaders encourage mums to show their infants graphic images of their ‘Holy War’ to numb them to the horrors of war and read them bed-times stories about death and destruction in Iraq and Syria.

Parents are so desperate for food that some are resorting to selling their sons to the warlords for the equivalent of £200.

Others are running away to join the camps after being radicalised at mosques in the Syrian city with the promise of three meals a day.

Around 300 kids a month are said to be joining in weapons training and bomb-making.