You are here: Home / MidEastGulf / ISIS have long suicide bomber waiting list, but rich Saudis are allowed to jump the queue 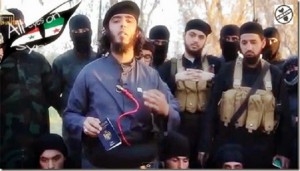 ISIS have a lengthy waiting list to be a suicide bomber – but rich Saudis are allowed to jump the queue.

Terrorists are so desperate to martyr themselves for the murderous terror group that they face a backlog of three months or more.

However, some militants are grumbling that senior members are letting influential Saudis strap on explosive vests while others are forced to wait.

Kamil Abu Sultan ad-Daghestani, a pro-Islamic State preacher from Dagestan, Russia, made the accusations in a recent post on the Russian language jihadi website Qonah.

“Those Saudis have got things sewn up, they won’t let anyone in,” wrote Kamil.

“They are letting their relatives go to the front of the queue using blat (a Russian word meaning connections).”

One frustrated wannabe suicide bomber was so desperate to slaughter himself and others he moved from Syria to Iraq, where there is a much shorter wait, reports Foreign Policy.

He waited patiently for three months, only to discover senior ISIS members were favouring wealthy and well-connected Saudis.

A British dad-of-two who blew himself up in a suicide bombing previously spoke of the struggle to get to the front of the queue.

Kabir Ahmed, 32, from Derby, reportedly drove a truck full of explosives into a convoy in Beiji, northern Iraq that killed eight police officers and wounded 15 others in November.

He was interviewed by the BBC’s Panorama programme last July and confessed to being a jihadist fighting with IS in Syria.

The militant said: “Everybody has got their name on the list to become a suicide bomber and everyone is forcing the Amir [leader] to push their name up.

“Everyone wants to fight for the sake of Allah.”